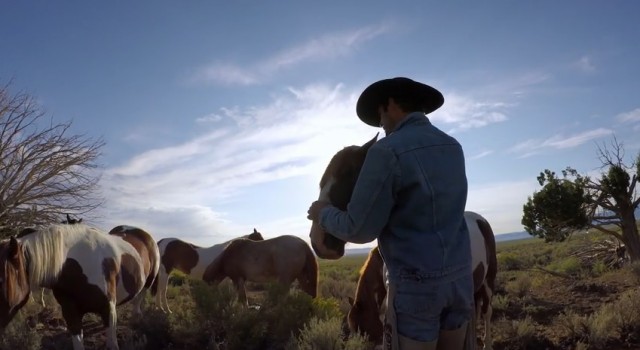 Screenshot from “GoPro: Wild Mustangs — A Legacy in 4K”

Mustangs carry so much symbolism of the “Wild West” with them, roaming free throughout the Western U.S. Through efforts by the Bureau of Land Management and the general public, population control programs have given some of these horses homes in domestic settings around the country.

It’s not too often, though, that we get an expanded look into the world of these hardy horses. This week as part of its HERO4: The Adventure of Life in 4K series, GoPro released a new video featuring the wild mustangs and a cowboy family who lives near them.

Screenshot from “GoPro: Wild Mustangs — A Legacy in 4K”

In stunning high-definition video, the cameras capture the spirit of the mustang and the respect the father and his two sons have for them. It is filmed at Mustang Monument Wild Horse Eco-Resort & Sanctuary,  900-square mile resort and Mustang reserve just south of Wells, Nevada that is home to over 600 Wild American Mustangs. The narrator is cowboy and family man Clay Nannini, who shares insight into the value of preserving Mustangs while introducing his children to this icon of American history, and a legacy worth protecting.

The video features some great aerial shots, as well as some cool GoPro angles that you may want to try out yourself:

What amazed me personally was the acceptance the herd showed towards their two-legged visitors. These horses are clearly well-adapted and not threatened by human presence. It’s a unique look into the interactions of the herd and how they approach visitors.