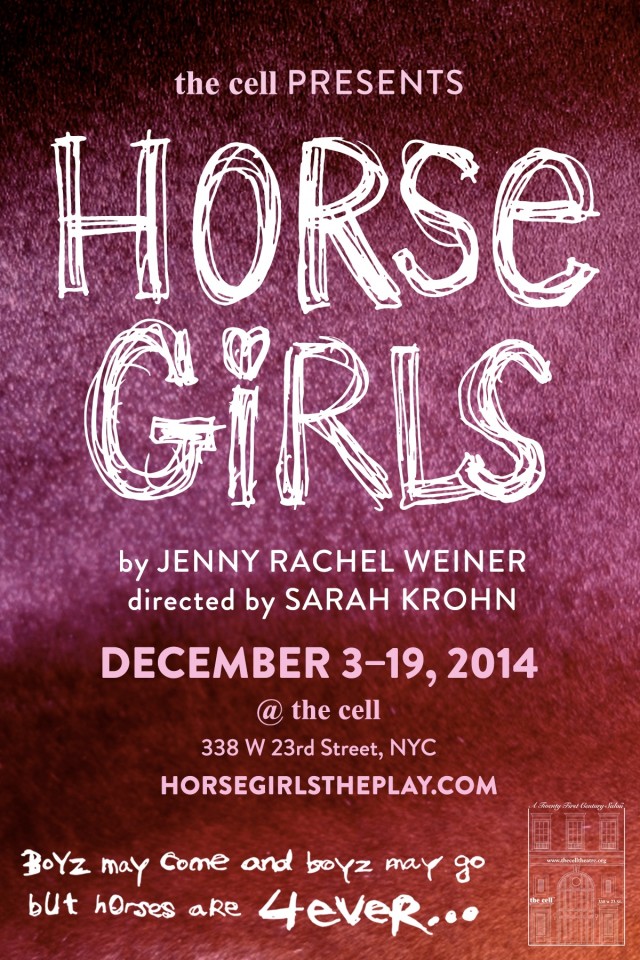 Drama as only the horse world can dish it out.

The title caught my eye: simple, even elegant. How many of us would have called ourselves “horse girls” growing up? (How many of us still identify? Most of us, really.) Horse Girls is a new one-act play that just opened in Seattle after a run in Chicago, about as far in the continental United States as you could get from my current hometown (though it will also be opening in New York City soon — more info on that later). Attending in person simply wasn’t an option, but I wanted to learn more. Fortunately, the playwright Jenny Rachel Weiner, a recent MFA graduate from the Fordham University playwriting program, was kind enough to send her black comedy script my way. Weiner is not a horsewoman herself, but grew up around many, which gave her a handle on the kind of language and terminology that horse girls would use in conversation.

I ventured forth into the world of the Lady Jean Ladies, the most exclusive horse club in Florida, based out of club president Ashleigh’s family stables. Ashleigh is everything you both loved and hated about your best barn friend growing up: she has the best horse, she wins every competition, she’s (supposedly) training with an Olympic rider, and she holds the key to your happiness in the palm of her hand. To be noticed by Ashleigh is everything. She may only be 12 years old but she’s already learned the stereotypes of the backstabbing gossipy world of the A-circuit. The dialogue between Ashleigh and her acolytes is peppered with the kind of backhanded compliments you might hear in a screening of Mean Girls, with a hilariously-exaggerated pre-teen equestrian twist:

Robin looks out the window and sees the horses–
Robin: Ohmygod you guys! Look! Here they come!
Everyone runs to the window. Except Tiffany. She keeps painting her nails.
All: Ahhh!
Robin: Ohmygod look how cute they are!
Margaret: They are so good. They are just so good.
Camille: They are such incredible listeners.
Robin: Look at Titus! He’s such a ham.
Margaret: See how they trot in a line like that? We taught them that. We teach them everything. To the horses–BYE YOU GUYS! WE LOVE YOU!
They all wave and blow kisses and yell a variation of BYE! Bye you guys! out the window.
Trish: Where are they going?
Ashleigh: I don’t know, we aren’t janitors.

While Ashleigh is the most accomplished rider of the group, Tiffany is a close second, setting up a horse-girl-rivalry that made me both laugh and cringe in recognition (the word “frenemy” comes to mind.) Tiffany’s parents have essentially bankrupted themselves to buy their daughter a nice horse and send her to horse camp with Jan Ebeling for the summer. In the way of horse clubs, Ashleigh declares that Tiffany missing so many meetings means she’ll be out of the club. The Lady Jean Ladies are debating the ethics of this decision when their missing club member Brandi bursts in the door with news she (perhaps mistakenly) overheard: the Lady Jean Stables is slated to be torn down, and the horses sold to slaughter.

Here’s where things start getting a little wacky — the girls invoke their heroine Ann Romney to save their horses from such a terrible fate, attempt to call the White House to connect with Michelle Obama who will obviously have Ann on speed dial for them, and then Ashleigh sends everyone downstairs to eat ice pops while she plots her escape on horseback with Tiffany. When the girls return and are not on board with Ashleigh’s plan, she senses that she is losing control of her followers and the club meeting devolves into a physical brawl with Ashleigh’s biggest and most coveted horse show trophy becoming a murder weapon. In the closing lines of the play, Ashleigh stands alone, singing Mariah Carey’s “Forever.”

The play is a black comedy, a genre which turns serious and taboo subject matter into humor while also making readers or the audience uncomfortable. Weiner understands this genre well, taking the obsessive and cruel world of pre-teen girls (amplified by horse-crazy) and pushes it too far, hitting right at the root of the problem. Ashleigh, like all of the Lady Jean Ladies, just wants to be loved — but she also wants to be the best. In the insanely-competitive world of the junior show ring, even Ashleigh’s over-exaggerated character isn’t actually out of the realm of possibility. The action intensifies, after all, not because of the rumor that their horses will be slaughtered but because Ashleigh loses control.

Weiner, of course, did not write this play to point out these dark truths of the show ring: “I think the horse preteen culture is a great example of obsessiveness in young girls, and diving into that world and finding the specificity allowed me to really find the universality of the deeper, human issues we all face, horse-obsessed or not, that live in the play. It really could be about anything; mine was always theatre.” True, not all horse girls are like the ones imagined in Weiner’s play — but in every circle, obsessions can run deep and dangerous, and the lens of the horse world magnifies those obsessions well.

Ultimately, I recommend Horse Girls — it’s not going to be the feel-good performance of the year, and you’ll leave the theater a little unsettled, a little uncomfortable. You might recognize yourself, someone you know, someone you once knew, in the characters on the stage. And that’s exactly the point.

Horse Girls is coming to New York City to the cell theatre, much to the joy of its cult following thanks to successful runs in Seattle and Chicago. The play will run in New York from December 3rd through December 19th and tickets are going fast — order yours at the Horse Girls website.