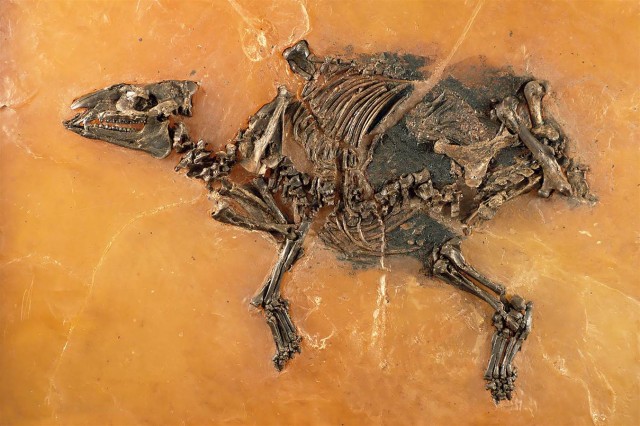 Once upon a time, a thirsty pregnant mare likely sealed her fate — and that of her unborn foal’s — when she drank from a lake poisoned with deadly volcanic gases. Now scientists are studying their remains.

The fossils of Eurohippus messelensis were uncovered by scientists at a former coal pit near Frankfurt in 2000. Study of the remains started just two years ago and pictures were first published this month.

The tiny specimen — Eurohippus was about the size of a dog — preserved the mare and her unborn foal in detail. Many of the bones remained in correct anatomical position, including her four-toed front feet and three-toed rear feet. Also visible are the uterus, the placenta, and the ligament that attaches the uterus to the mare’s lumbar vertebrae. The structures are similar to those found in horses today.

“The quality of the fossil is exceptional,” Dr. Jens Lorenz Franzen told NBC News. “The size of the fetus and the presence of fully developed milk teeth indicate that it was close to delivery when the foal and its mother died.”

Researchers speculate the cause of death could have been due to asphyxiation from carbon dioxide gas, as the area where the remains were found had frequent volcanic activity during the Eocene epoch.

So, how far back in the evolution of Equus does Eurohippus messelensis date? The Eocene epoch lasted from 56 to 33.9 million years ago, which puts Eurohippus down at the bottom of his chart.

Bonus fun fact from Carla Lake: The chestnuts and ergots on modern horses’ legs are believed to be a vestigial remnant from ancient equine species. As the toes fused together over millions of years into a single hoof, one of them may have migrated upward to become what we see today as a chestnut.