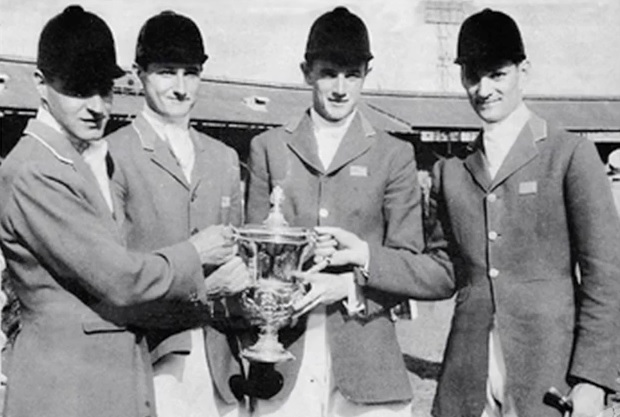 The year was 1959 and it was the final jumping event of the 1959 Pan Am Games, held at Solider Field in Chicago. The U.S. team was George Morris on Night Owl; Frank Chapot on Tally Ho; Bill Steinkraus on Riviera Wonder (a striking grey relative of Gem Twist); and Hugh Wiley on Nautical (the horse the Disney movie The Horse With a Flying Tail was based on — Noelle Maxwell wrote a great piece for us on him here).

The team won Gold, but no thanks to George Morris!

While narrating the video he explains, “As I finished and walked off the infield I jumped off my horse to get a Coca-Cola because it was so, so hot — I was about to die.”

“The groom took my horse and I was eliminated because I didn’t walk past the track, I just got off on the track or wherever it was — I didn’t dismount at the right place,” he says. “Well, there were four us riding and I’m sure three scores counted so were still alright but that a very, very, very hot day but it that was a really cold lunch…. my teammates didn’t speak during lunch, so I remember the lunch very well.”

Watch the video, narrated by George, inspired by the archival footage of Gordon Wright and shared by Bernie Traurig of EquestrianCoach.com. Bernie, who achieved success in multiple disciplines, has done equestrian sports history a great service by collecting and granting the public access to a number of vintage videos chronicling the evolution of 20th century show jumping. Learn more about Bernie, his career and his work by checking out our Q&A with him here.

The Pan Am Games take place every four years with the next one coming up July 10-26, 2015 in Toronto, Canada. More info is available via the website here.