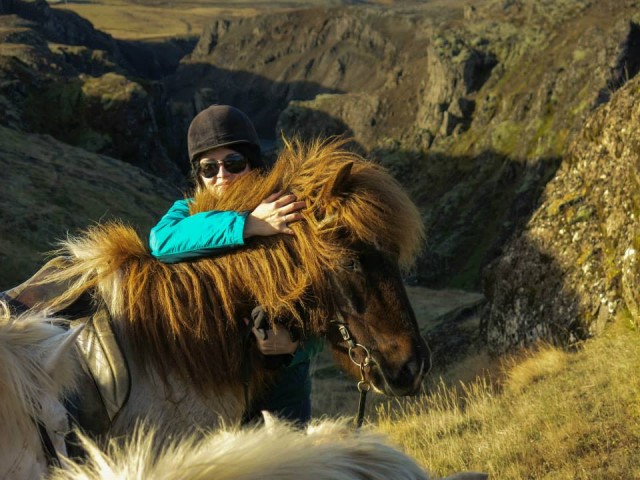 Meet Yulia Frolova, a self-proclaimed literal “globe trotter” who has set herself the goal of riding a horse in every country she visits. Her count so far: 25.

Meeting a show jumper at the Aria Horse Club in Tehran, Iran. All photos courtesy of Yulia Frolova.

Most horsewomen would see a career that requires international travel 15 to 25 times a year to be a hindrance to horseback riding –how much saddle time can one find when you’re jet-setting all around the world? But for Yulia Frolova, her trips to various all over the globe is an opportunity, not an obstacle: She’s set herself the goal to ride in every one of those countries she visits, and with 25 locations under her belt there’s no stopping her now.

Taking a jumping lesson in Beirut.

Born in Ukraine (when it was part of the Soviet Union), Yulia traveled often with her family due to her father’s work. Eventually, the family settled in Almaty, Kazahkstan. Yulia now resides in the Kingdom of Bahrain in the Persian Gulf, where she keeps her own horse, an OTTB named Dream, and rides two more, an Andalusian stallion named Romeo and a KWPN gelding named Twister.

A lesson at the Real Esquela in Spain.

But when Yulia’s traveling the world, her three equine companions at home have to share: while on a five-week five-country business trip in 2011, Yulia, inspired by a friend of her father who liked to parachute in every country he visited, decided to try the same thing with her own passion, horseback riding. With her itinerary typically set about two or three weeks before she travels, Yulia gets enough heads-up to start searching for places to ride — so far, she’s ridden in the United Arab Emirates, Jordan, Iraq, Russia, Iceland, Spain, France, Oman, and the United States, just to mention a few.

Snuggling a fuzzy Icelandic horse in its native country.

Yulia’s international riding experiences have been incredibly varied. In some places, she finds riding schools or clubs where she can pick up a lesson. In other countries, she finds herself on the wildest adventures: up and down mountain passes, riding on beaches, even milking a horse during the Kazahk tradition of the horse wedding. I asked her what her favorite experience has been to date, and she replied with a list: “Every place I rode is dear to my heart one way or another.” Highlights from her list include “most demanding discipline tried” (polo with the Dubai Polo Club), “coldest place to ride” (Altai Mountains in Russia) and the surprising “most difficultly finding a place to ride” (Germany — who would have guessed?)

Milking a mare in the traditional Kazahk Horse Wedding festival.

To help document her experiences, Yulia keeps a blog titled Equi-Geo to share her stories with readers where her vivid language and beautiful photography let us vicariously live some of her adventures. As many travelers might agree, the experience of traveling and immersing oneself in a new culture in a new place can strike us with some great truths, and Yulia is not unusual in this respect. While reading her blog, I reread one entry in particular — Yulia had been traveling in Iraq, surrounded by the news of bombings and terrorist attacks, but still managed to find a place to go for a ride. On her way back to the hotel, Yulia reflected on her experience:

On the way back, passing through the checkpoints, I couldn’t stop thinking that whatever political, cultural and environmental difficulties nations are experiencing, there will always be horses and there will always be people that cannot imagine their lives without them.

With this truth to guide us, how beautiful is it to know that all around the world, we as horse people are never alone?

Riding in the Altai Mountains in Russia.