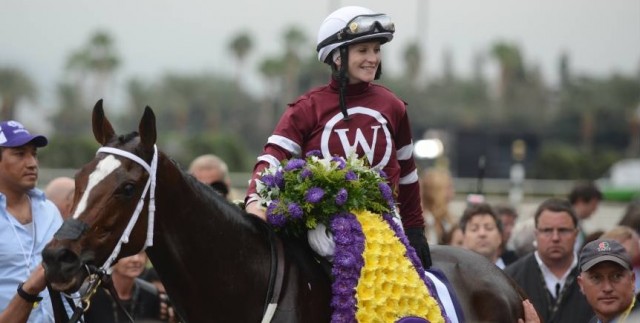 Hey, if you’re gonna announce your retirement, might as well do it on national TV after winning the Breeders’ Cup Distaff while pregnant.

Rose Napravnik, how do we love thee? Let’s count the ways: you’re arguably one of the top jockeys in the country and hands-down the top female jockey. You’ve won the Kentucky Oaks twice, ran in every Triple Crown race (a first for female jockeys) and now have won two Breeders Cup Championships. You’re a horsewoman, advocate, and to make you even more of our hero, you event a little bit on the side with your OTTB. And, like a lady after our own hearts, you went out with a heck of a bang, rocking the racing world by announcing your retirement while simultaneously announcing your pregnancy while simultaneously celebrating Untapable’s win in the Breeders Cup Distaff on Friday.

Rosie’s had a banner 2014 season: She piloted three-year-old Vicar’s in Trouble to victories in the Lecomte Stakes and the Louisiana Derby and rode the horse in the Kentucky Derby; she captured her second Kentucky Oaks victory aboard Untapable; she finished her own personal Triple Crown with Bayern in the Preakness and General A Rod in the Belmont. She tied for second place as top-earning jockey for the Churchill Downs meet despite being sidelined with a separated clavicle after a training accident. Rosie was back in the saddle in time to reunite with Untapable to capture the Breeders Cup Distaff, a major win for a three-year-old filly running against older competition and marking the horse as the top female in the country.

Rosie celebrated her victory with a fist-pump under the wire and then tried to enunciate how much the victory meant to her in the post-race interview, jogging back to the winner’s circle. Knowing retrospectively the bombshell she was about to drop on the nation, it’s understandable that the jockey seemed a little tongue-tied — and easy to see just why this victory and this mare was truly so special. A few moments later, standing next to Untapable’s trainer Steve Asmussen and owner Ron Winchell, Rosie invited her mother to stand alongside her so she could officially tell her first while the cameras rolled: Her retirement from racing started on Sunday, and she and her husband, trainer Joe Sharp, were starting a family. Cheers broke out in the audience as the impact of her announcement hit home. Rosie’s seven weeks pregnant, and one of the commentators jokingly gave praise to Untapable for carrying two riders to victory.

Check out a replay of the race and Rosie’s big announcement:

In a later interview, Rosie outlined her plans: While she’s not promising a comeback within the next year, she’s not ruling out an eventual return to the saddle. For now, she’s calling her retirement “indefinite.” She’s looking forward to helping her husband Joe with his training career; Sharp recently started his own training stable after working as assistant trainer to both Mike Stidham and Mike Maker. According to Rosie, more and more owners are calling Sharp to take on their horses and she is excited to help him develop his program. (We hope that she’ll be spending more time eventing too!)

Best of luck to you, Rosie!