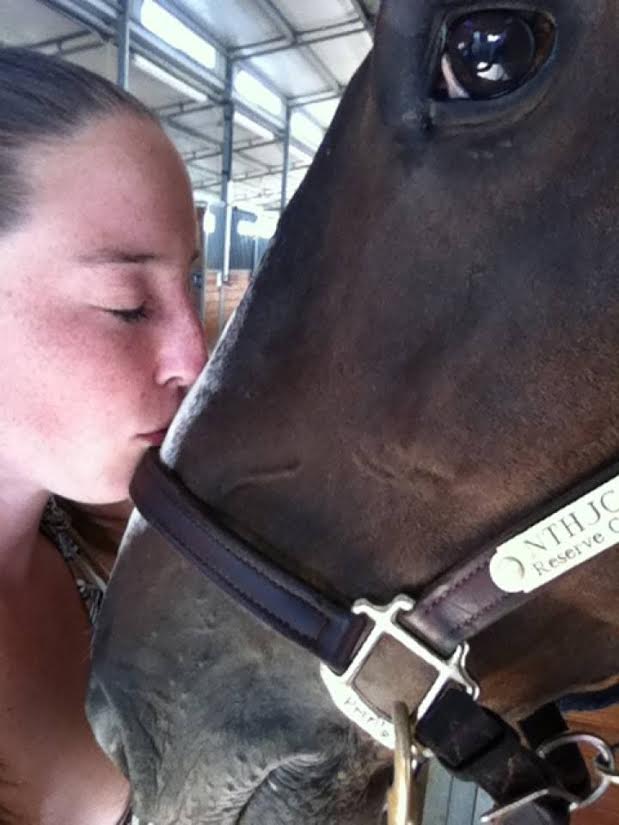 Cleave is a 10-year-old, 16.3-hand American Warmblood gelding who has seen his share of ups and downs in life.

At one point, he was one of several horses living in the lap of luxury on a farm in Florida. Unfortunately, his owners fell on hard times and made the unbelievable decision to sell their horses to slaughter. They were loaded onto a truck and headed to their unfortunate destination in Canada. On the trip north, the truck stopped in Delaware and had the fortune of crossing paths with an assistant coach for the Delaware State University equestrian team. The coach asked them to unload and let her see if there were any horses that they might be able to find new homes for. Fortunately, Cleave was one of the horses that caught her eye. She was able to convince one of the team members that Cleave might be a good fit for her, especially for such a bargain price. Regrettably, this was not Cleave’s happy ending, but at least it was a step in the right direction.

Initially, they tried to incorporate him into the program at the school. He was used lightly on the flat and occasionally jumped very low fences. While he was willing and sweet, Cleave was more green than was appropriate for the program or for his new owner, so he began spending more and more time as a pasture horse. Fortunately, it was during his time at the school that he caught the eye of one of the team members who was from my area. She convinced his owner that she could bring him home for the summer, put some training on him and get him sold for her. His owner agreed and this is where fate was finally putting him on his path to his forever home.

Before bringing him home, she posted about him to try and generate some interest. My trainer was one of the people who were intrigued. She knew and trusted the girl bringing him to Texas and asked for more information. That was when we got THE video. It was a very short, simple video of Cleave longing over a small 2’ fence. The first time he jumped it from a normal distance and it was fine. The second time, he jumped from much further away and he jumped it PHENOMENALLY!

That was it, we were sold. My trainer contacted her immediately and asked to be the first person to have a shot at him. It would take almost two months before he made it down to Texas, but we were willing to wait. This was one of those times where you just have to follow your gut instinct. When he finally made it here, he wasn’t much to look at. He’d been living in a pasture so he was a little skinny and his tail was horribly matted.

We tried him in a small area at the farm she had brought him to. He was green and a little opinionated, but even just going over the little 2’ jump, we still thought there was definitely something about this horse. We trailered him to the farm where my trainer worked and tried him one more time. HE WAS AMAZING! Even though he had never been to this farm and never seen real jumps before, he took it all in stride and just kept jumping better and better. We faced him with a gymnastic exercise and he rose to the task. The final straw came when I messed up the approach to the gymnastics and he saved my life and jumped remarkable as well.

After the cursory vet check, I bought Cleave and have never once regretted that decision. Since he was very green, we planned on bringing him along very slow, with a goal of jumping him in the Low Children/Adult Jumpers (1.0 – 1.05 meters) after a year of training. Cleave had other ideas. After working on the basics, like steering and moving off of the leg, the jumping still came so naturally to him. No matter what height we set the jumps at, he always jumped at least a foot higher. So, after less than six months, we were already competing in the Low Children/Adult Jumpers.

Cleave soaked up everything like a sponge and just kept improving. Pretty soon we were moving up to the High Adult Jumpers (1.10 – 1.15 meters) and he kept rising to the occasion. While schooling at home, my trainer decided to test both my and Cleave’s limits. She was sneaking one of the jumps higher and higher as we schooled over it. Cleave and I jumped 4’6” together for the first time and it was like flying!

Now, I’ve been writing all of this about Cleave’s athletic ability, and that would have been more than enough for me. However, he is also the sweetest, dorkiest, most loving horse ever. He looks at me with the kindest eye, he licks me constantly and he will follow me anywhere.

I cannot believe that such a gem was placed in my life. He is my angel and I am his. He will have a home with me for the rest of his life. He is my Cleave, or you can call him by his show name, Call Me Clever.