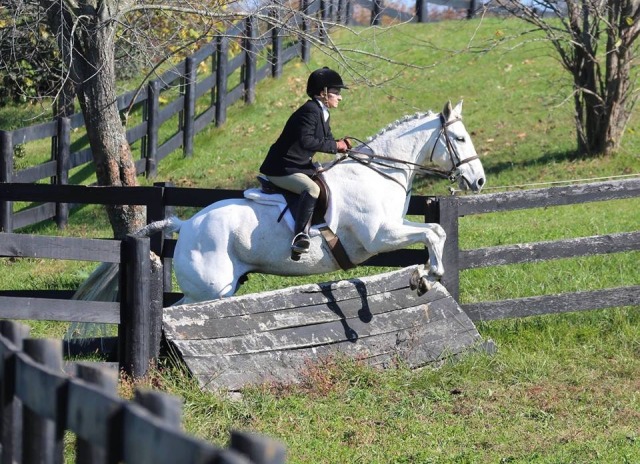 Picture-perfect fall foliage, tears and a healthy dose of port made for a memorable first Opening Hunt.

My first Opening Meet has been about a year in the making, and I can hardly believe I’m here.

“Here,” of course, being standing on top of a log, cursing my horse, who, instead of standing quietly for me to remount, has decided to leap OVER the log while I try to stay calm and not burst into tears.

It’s been a trying weekend so far.

My borrowed horse, Seven Up, is completely sick of me after I spent a total of six hours Friday night and Saturday morning grooming the living bejezus out of him. Up to this point, I never had to braid for any kind of equestrian event, so on Friday night I arrive to the barn around 6:30, brush and bathe him, and separate his mane into little sections with one of these doohickeys:

But Seven does NOT stand tied very well for long periods of time. He weaves and fidgets almost nonstop–so just separating about a third of his mane into little ponytails took about thirty minutes. I realize that with his weaving and my inexperience braiding, I won’t finish until dawn if I go for millions of perfect little hunter braids. I resign myself to the fact that I’m going to be that person. Big button braids it is!

Around 9:30 p.m., we’re done, I turn him out, and I say a little prayer that I won’t have to repeat the entire process in the morning.

I wake up, ready to roll at 5 a.m. Thankfully, hounds will not be moving off till 10:30, but I’ve budgeted plenty of time because  I know I will spend at least 30 minutes getting my stock tie fluffed and pinned just right. I throw on sweatpants and a rain jacket over my ensemble, and I’m out the door by 6.

Thank God, Seven has kept his braids in, and  his legs are mostly clean. Now to attempt braiding his tail, which I have never even practiced. And it actually would have gone well if Seven wasn’t weaving from side to side like a patient in the psych ward, and if it wasn’t breakfast time.

I unclip one side of the cross-ties so he can eat from a bucket on the ground, and get to braiding. I’m positive that I look like a complete crazy person to the Pony Clubber feeding the horses with her dad. I trail along behind Seven, holding his tail as he weaves and swings his butt from the wash stall into the aisleway (the better to enjoy breakfast, I guess). I was not going to let go and sacrifice nearly an hour of braiding.

Nowhere near perfect, but neither is life.

With fifteen minutes to go before we leave, I tack up, throw his cooler over everything, do one final check to make sure I didn’t forget something, and we’re off!

I’m one of the first ones to arrive, so I’ve got plenty of time to get ready. Or so I think. Seven loves to hunt, and he’s all excited, so it takes way longer than it should and a bruised foot (mine) to get his bridle on and mount up for the Stirrup Cup.

Turns out, holding double reins in one hand, drinking hot cider, and trying to mingle while not getting too close to unfamiliar horses is NOT EASY. Total first-world problem, but still. I was not about to spill anything on my dazzling white steed or my ($30 used) Tailored Sportsmans–even though I knew full well that after one or two stream crossings, all of my hours of cleaning would be essentially for nothing.

Pony moms shushed their kids, and a field of at least a hundred gathered around the huntsman and staff for the blessing of the hounds, and some announcements from the masters. I couldn’t hear a thing, so I just tried to locate which of my friends I would follow once we moved off.

“Scent be true…something something…and that the hounds be swift…mumble…Amen,” said the priest in his blessing.

Amen is right, I thought!

I made the leap from second flight to first flight during the cubbing season, and since found that it wasn’t as intimidating as I thought it would be–from all the helmet cam videos of hunting in Ireland, I was envisioning jumping four-bar gates, galloping headlong down steep hills, and scrambling through ditches. Luckily for a newbie like me, the fixtures around Potomac Hunt country don’t have many jumps, and the ones they do have are 3′ or under. (I also found out that peer pressure can do wonders for your confidence–a 3′ jump doesn’t look so scary when you see 10 other people clear it in front of you, and you know that your horse is going to catch up to the rest of the field with or without you.)

The hounds and staff started moving off, and I started getting butterflies. Technically I was a guest, but since I had hunted before, I  got permission beforehand to ride without an official host to babysit me. I stuck with some of the other hunt people I knew and hoped no one would yell at me for riding in the middle of the field rather than in the back. The first draw was in a covert around the back of one of the kennel’s pastures, and the hounds started speaking almost right away. I steeled myself for a run.

I managed to keep Seven trotting downhill, but once we were on a straightaway heading toward a small coop, he switched into high gear. Damn it, why does the curb rein not work when you need it to?! (Probably because I was in the fetal position.) I was getting a little too close for comfort to the horse in front of me, so I kicked Seven into circling around to go farther back in line. Clear!

Then it was gallop uphill, jump, downhill, jump–people fell off, we paused to collect a loose horse, then we turned around and did it all over again. I suspected all of the action was partly for the photo ops and partly to whittle down the number of followers in the field. About an hour into the action, about half of the riders and horses remained, and we settled into a more sensible pace.

Then we came to a check along a soybean field. A friend of mine, Karen, noticed that my half pad was slipping way back, so I hopped off to readjust…just as the rest of the field started to take off. Seven started to jig. He knew his job! But Karen and her saintly horse Chloe stayed back so we wouldn’t get left in the dust.

Now, though, Seven was really not wanting to stand still. His breastplate was off-kilter to one side, I still needed to hike up his girth another hole, and I was clearly a complete failure at hunting.

Why did I not check my girth before we moved off?! Never making that mistake again…but in the moment, I had no idea how I was supposed to mount up with him in such a state. Thankfully Karen has the magical ability to channel the cool, calm reassurance of a flight attendant during a plane crash in such situations, and she, quite sensibly, led me down the hill to a log we had jumped earlier to use as a mounting block. But, as I mentioned, Seven knew his job.

He locked on to the jump, and LEAPED–with me still holding the reins, thankfully. I clambered over the log and tried again, from the other side.

I lined him up, he wiggled, and I gave him one good smack in the chest. “STAND,” I growled, and tried yet again–but my reins were too long, and I was too discombobulated, and Seven popped over the jump back to Karen and Chloe. I knew my chances of not getting hurt were very slim if he kept this up, but I was so frazzled I could barely function. I led him away from the log and by some miracle, I hauled myself up onto my spinning, jigging beast from the ground.

I took a deep breath. So did Seven.

We jumped the log (again) and trotted off. Soon the second field came into view, and we caught up to the back of first as soon as it was convenient.

Trying not to compare my sad beginner braids with the professional braid jobs!

I know it won’t be the last time I embarrass myself out in the hunt field. But walking that line between brilliance and complete embarrassment is why I like hunting.  It’s completely ridiculous to get all dressed up to play in the mud, and it’s asking for trouble to have dozens of horses galloping, jumping, and scrambling through water crossings in whatever random path the fox may take. That’s why it’s so satisfying when, even if everything goes wrong, you somehow make it through hours of hunting. No one’s the worse for wear, everyone’s legs feel like Jello, and the only way to finish off the day is with a healthy swig of port.