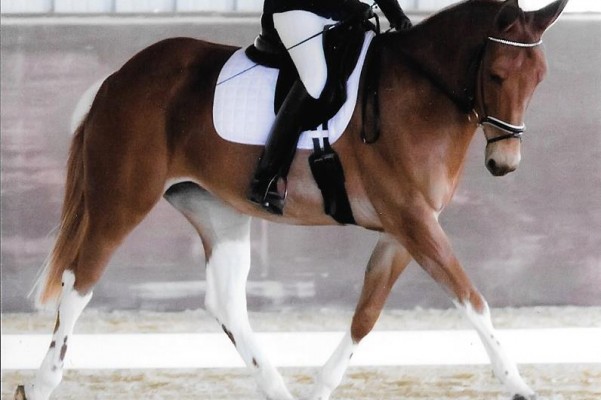 Laura Hermanson and Heart B Dyna bray in the faces of anyone who thinks dressage is elitist.

When Laura Hermanson received an email saying she was long-listed to compete at Training Level in the US Dressage Finals in Lexington, Kentucky, she halfway thought it was a joke.

She had been showing mules for the past three years, and she was campaigning her own molly mule Heart B Dyna toward making it to the USDF regional finals in California.

But the USEF has only allowed mules in competition since 2004, and a mule has never competed at the US Dressage Finals.

But a few weeks later, she received another email. Dyna had been bumped up from the waitlist, and was officially qualified. It was a dream come true… but Laura called the USDF juuuust to be sure.

“You know this is a mule, right?” she asked.

A pause. A shuffle of papers.

“Finally, they said yes!” says Laura. “And I knew I had to find a way to make it happen.”

Laura and 12-year-old Dyna have come a long way since they first met in 2006. Laura, a dressage trainer at Oak Star Ranch, had the idea to buy a mule with the gaits for dressage after a client’s mule really challenged her as a rider and a horsewoman, changing her skills for the better.

“It’s hard to pinpoint what makes them so special,” she continues. “Everything with them is like a horse, just amplified. Their power of retention is amazing, so the biggest trouble is reiterating something too much. You just have to be very accurate and fair… and you need a sense of humor because their dads are donkeys! They just have a piece of them that says, ‘nope, I’m not doing that today.’”

Seemingly, dressage would be the perfect discipline for an equine that demands an accurate ride. But Dyna didn’t think so at first.

“Dyna was a very, very tricky-minded creature, but very talented and very athletic,” says Laura, “I had to learn all these disciplines with her. I tried jumping; I tried cutting with her. Dressage has always been my background, and I knew there was probably going to be a time when I could focus on that exclusively with her, but with mules you have to be in it for the long haul, since they take a long time to mature.”

While riding mules isn’t too rare in California, at dressage shows other competitors were initially skeptical of Laura’s unconventional mount. But when her client horses and Dyna did well, their doubts subsided. Laura has gotten comments like “Great relaxation of the ears” on dressage tests!

But she didn’t trust her old truck and trailer to make it all the way from Madera, California, to Lexington. The cost of shipping Dyna across the country was daunting, and that was before hotel, rental car, vet and show costs. So Laura talked to a friend who worked in the movie business, and learned about GoFundMe as a means to bring the first mule ever to the US Dressage Finals. She surpassed her goal of $8,000 in little over two weeks.

“It’s been unbelievable. This was the first time I’ve ever really had to ask for help, especially financially—but it’s just grown kindness breeding kindness, and opened up a community of people I didn’t even know existed.”

She has gotten donations from all kinds of mule supporters, from the owners of Dyna’s full brother to complete strangers with plow mules.

“Dressage has the reputation of being elitist. And I’m living proof that’s not true. I’m riding a mule for goodness sakes!” Laura laughs. “It goes to show that anyone can do this. If you have a dream, you can do it.”

Thanks for sharing your story with us, Laura, and best of luck to you and Dyna next week!