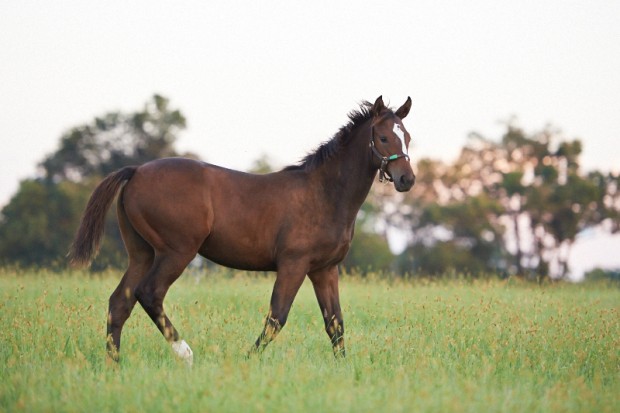 Tragedy strikes Zenyatta and her connections just a few days shy of the five year­ anniversary of the mare’s greatest victory at the Breeders Cup Classic.

Team Zenyatta announced on yesterday, October 29, that the mare’s first filly was euthanized at Rood and Riddle Equine Hospital after a paddock accident at Lane’s End Farm in Kentucky. The filly, nicknamed “Z Princess,” was a weanling by War Front and Zenyatta’s third foal. She was born on Easter morning of this year.

From Team Zenyatta: Dear fans, We are deeply saddened to report the passing of Zenyatta’s filly, affectionately nicknamed Z Princess. She was a member of our family and had just begun to make her mark on the world. This is a heartbreaking loss for those who knew and loved her.  The following is a statement from Lane’s End Farm:

It is with a heavy heart that I must report the death of the 2014 War Front / Zenyatta weanling filly.  She was humanely euthanized last night at Rood and Riddle Equine Hospital after a paddock accident on the farm.   As caretakers of these Thoroughbreds, we collectively mourn the loss of this beautiful filly.   On behalf of the Farish family and the entire staff at Lane’s End Farm, our condolences go out to Jerry and Ann, Team Zenyatta and all the great fans who support Zenyatta.   Respectfully, Mike Cline General Manager of Lane’s End Farm

At this time, we ask that all messages of love and condolence be sent to the Zenyatta office. Team Z would like to lessen the load on Lane’s End Farm and their dedicated staff. Zenyatta.com 300 E. 54th St. #27A New York, NY 10022 Our planned 2014 Zenyatta.com Celebration will continue as scheduled this weekend. This event is about celebrating the love that we share for Zenyatta, the strength of this community, and working together to improve our sport. We invite you to join us in raising money for Thoroughbred Rehab Center, Inc. Details will follow. Thank you for all of your love and support during this difficult time, -Team Z Z Princess had just been weaned at the end of September and was reportedly loving her newfound independence and pasturemate friends.

The mare’s first colt Cozmic One (by Bernardini) is currently in training with John Sherrifs, who also trained Zenyatta to thirteen Grade I victories and only one career defeat.

Zenyatta, the 2010 Horse of the Year, was a runaway fan favorite: It was hard not to get excited about this big, beautiful filly who could run hard and play with the big boys. She became the only filly to ever win the Breeders’ Cup Classic in 2009, which was arguably one her best career performances. Her 19­-race winning streak was broken only by a loss by a head to Blame in the 2010 Breeders’ Cup Classic as the mare sought to make history again by winning back­-to­back Classics. Regardless of her only career defeat, Zenyatta won Horse of the Year in 2010 and retired to life as a broodmare at Lane’s End.

The loss of a filly that could have been “the next Zenyatta” is heartbreaking to all of us who are fans of the racing Thoroughbred. Zenyatta’s owners announced earlier this year that the mare would have the 2015 breeding season off, so fans will have to console themselves by following the career of Zenyatta’s first two colts, the aforementioned Cozmic One as well as the 2013 colt Ziconic by Tapit.

The 2014 Breeders Cup Classic goes off this weekend over Friday and Saturday at Santa Anita Park in California. Relive the thrill of Zenyatta’s 2009 victory:

Julie June Stewart wrote in a blog for America’s Best Racing, “This weekend as we celebrate Zenyatta’s accomplishments and remember her thrilling Breeders’ Cup races, many a mind will also remember a precious little girl who was lost too soon. As they celebrate the crowning of new racing royalty, there will also be those who wonder what might have been…The price of dreaming is to take on the day with the risk of loss. The sun will rise tomorrow in Kentucky and California as new dreams are formed. Yet there will always be a tug of the heart as we remember what might have been. We had a Princess once and she was beautiful. And we will never forget.”

Our condolences go to Team Zenyatta, her owners Jerry and Ann Moss and the staff at Lane’s End Farm.

UPDATE: A memorial fund has been set up on IndieGoGo, with donations to be given to Z’s connections to donate as they please.