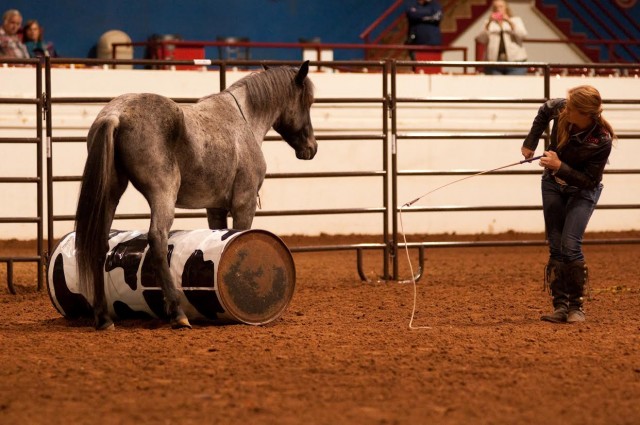 While female trainers have been achieving great things in the world of natural horsemanship, think of most of the “big names” you see and hear so frequently: Monty Roberts. John Lyons. Clinton Anderson. Buck Brannaman. These are all men — great men who have changed the world of horsemanship, but all men. True, Linda Parelli can definitely be considered big-time — but in partnership with her just-slightly-better-known husband Pat. While women everywhere are working with horses and achieving just as much, you just don’t hear much about them on the international scale. The American Horsewoman’s Challenge was created to celebrate these women and bring them into the spotlight.

The brainchild of Jim “Hutch” Hutchins, an equine-event producer from the Pacific Northwest, the Challenge takes place in a multi-day competition, judged on a variety of criteria in three events. 2014 marked the first year of competition, with the finals event taking place at the Lazy E Arena in Guthrie, Oklahoma on October 3-5.

The inaugural group of contestants came from far and wide, representing every corner of the United States as well as representation from Canada as well. Contestants are selected (the 2015 selection process has already begun) based video audition; prospective contestants over the age of 18 submit a 1o-15 minute video of themselves working with a horse for whom they have served as primary trainer. The judges are looking for overall horsemanship skill, equitation, light-handedness and partnership. The top 50 video submissions are then selected for the final competition, eight months prior.

Here are highlights from the winning performance of the liberty phase at the Finals:

Finalists then have those eight months to work with their selected equine partners — each finalist may choose up to two horses to train, but one horse must be declared four weeks prior to the Finals. In the event that the primary horse is deemed unsound with veterinary proof, an eligible substitute horse may be used. Horses selected must have no more than 60 days of training and 10 rides prior to the start of the eight-month training period.

At the Finals, contestants and horses compete over two days in Liberty, Ranch/Trail Versatility and Western Dressage. Each phase is scored; the top 10 contestants overall are invited to the final phase of competition with a “clean slate” to compete in a freestyle performance, demonstrating their versatility and any other skills they wish to showcase. The freestyle winner is declared the Challenge Grand Champion.

My favorite freestyle performance from the 2014 Finals was the reserve champion Hannah Catalino and her mustang Ace:

To learn more about the American Horsewoman’s Challenge (and maybe throw your hat into the ring as a contestant!) check out the event website at www.horsewomanschallenge.com.