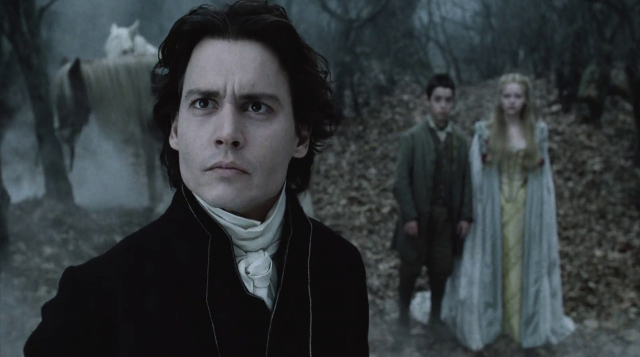 We are in New York. The year is 1799. Constable Ichabod Crane (Depp) is arguing against the use of torture devices to obtain guilty pleas. In an effort to prove that science and logic can solve any crime, he is assigned to the town of Sleepy Hollow to investigate the aforementioned beheadings. Not only were the victims beheaded, but also the heads were never found.

The powder-wigged locals then regale Crane with the story of the Hessian Horseman. The Horseman was a mercenary soldier, known for his love of battle and carnage. He had a wicked horse too. It looms around his grave, pawing the frozen ground with its bloody legs.

This ghost story doesn’t impress Crane. He is a man of science. Men of science don’t believe in ghosts. He assures the locals he will find the very human criminal committing the heinous murders. Crane acquires a fine steed, named Gunpowder, and a young assistant to aid him in his investigation.

Shortly after, Crane witnesses the Horseman take another victim. The event brings the death toll to six and waves goodbye to all his scientific theories!

Crane, his loyal assistant, and the lovely Katrina Van Tassel head out to the Western Woods to locate the grave of the Horseman.

What they find is a really creepy tree.

Crane then finds the Horseman’s grave and at least one part of the mystery is solved. Someone has taken the Horseman’s skull, and now the ghost is wreaking havoc and stealing heads until his own is restored.

So who is controlling the beast? Is it Doctor Lancaster, Reverend Steenwyck, Notary Hardenbrook, or perhaps the powerful Baltus Van Tassel? And what is Katrina up to? Was a crow’s foot in that “drink” and why is she always creeping around!?! You’ll just have to watch and see!

I rarely watch horror movies, but this isn’t like the foul SAW series or the rather annoying Paranormal Activity. It is a great old-fashioned Hitchcock style murder mystery and I liked it! Be warned though, I haven’t seen this much blood since I sat through Braveheart. Queasy stomachs, beware! It’s rated R, so young’uns shouldn’t watch either.

But let’s move on to more beautiful things, namely Johnny Depp. He is one of the few men in the world that can pull off weird and hot all at the same time. Not to mention he is a horse lover! Depp adopted “Gunpowder” after filming ended. Cast mates Christina Ricci and Christopher Walken also do not disappoint. The costumes, sets, CGI special effects and soundtrack are all fantastic as well. Tim Burton really pulled off a new telling of this very old tale.