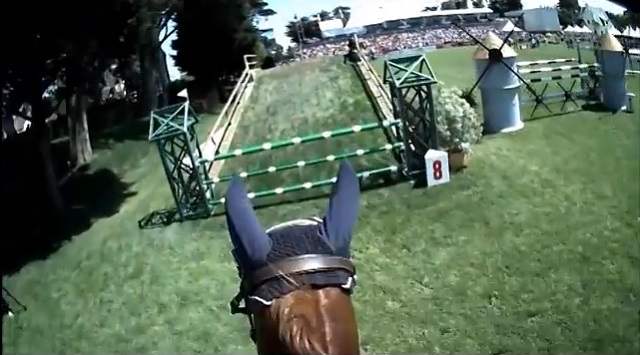 At first it just seems like a standard Grand Prix jumping track… but then things start getting crazy. Why so many liverpools? Is this cross-country? Are we seriously jumping THAT??!?

Derby classes combine traditional jumps with obstacles that would put even the most seasoned Grand Prix horse to the test: banks, water, airy verticals, groundline-less triple bars and a host of other assorted unorthodox tests of bravery and scope.

This helmet cam is from the Derby de la Région des pays de la Loire, which took place at La Baule in France in May 2014. The rider, Italy’s Luca Moneta, and his horse Jesus de la Comune take it all in stride — we love looking out at the course between those eagerly pricked ears. Their round is followed by footage of Luca on his Grand Prix horse accepting third place in the Grand Prix. Fist pump!