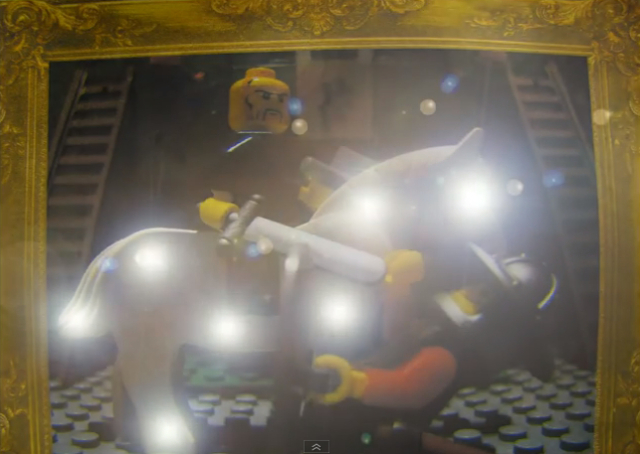 The story takes place in Hungary at an unspecified date. There is a centuries long rivalry between two families: the Metzengersteins and the Berlifitzings. No one knows how the rivalry started but they do have a cryptic prophecy that reads, “A lofty name shall have a fearful fall when, as the rider over his horse, the mortality of Metzengerstein shall triumph over the immortality of the Berlifitzing.”

So… Frederick, an orphan who inherited the Metzengerstein family fortune at a young age, may or may not have started a fire in the Berlifitzing stables. Poe never outright blames Frederick, but the story’s whole town did.

Frederick later sits staring at an old tapestry depicting “an enormous and unnaturally colored horse” that belonged to the Berlifitzing clan. He sits there staring long enough that he sees the horse move. Slightly freaked out, Frederick opens the door to leave causing his shadow to fall on the tapestry.

Outside, Frederick finds men handling a “fiery-colored” horse that has been found in the stables with the letters W.V.B. branded on its forehead. Despite the fact that the B could clearly stand for Berlifitzing, not to mention that Baron Berlifitzing died in the fire trying to save a horse, Frederick claims the steed.

Frederick becomes addicted to horse riding, leaving his work and social life behind. The neighbors start to suspect he is a madman. “One tempestuous night,” Frederick saddles up for a ride in the forest. When he returns, his castle is on fire!

The horse, carrying “an unbonneted and disordered rider,” leaps into the flames and “disappeared amid the whirlwind of chaotic fire.”

Immediately the fire “died away,” and in the smoke horrified onlookers observed “the distinct colossal figure of – a horse.”