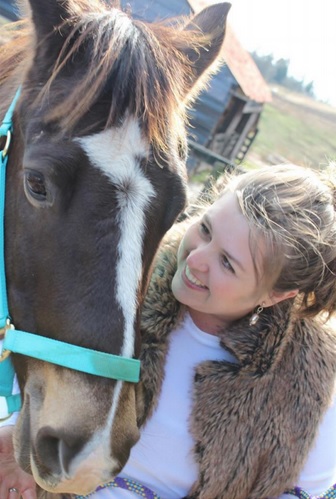 When it comes to horses, can true love strike twice?

After Tabetha Taylor lost her first horse/childhood best friend Dandy, she thought she could never again feel so deeply about a horse. Then she met Thunder.

My passion and fascination with horses started at the ripe old age of 9. I was fortunate to live next door to a kid’s wonderland of cousins and horses. By 10, my cousins taught me to ride, and the quest to find a horse, even though we couldn’t really afford one, started.

I would have done anything for a horse. One day my uncle, a livestock hauler and livestock auction owner, brought home a nice little roan mare. What I discovered is that she was far from nice and bucked me off more times then I could count. I always got back on no matter the injury, bump or bruise. There were brick walls I was thrown into, manure piles I landed in and legs that were stepped on.

I didn’t care… she was going to be mine. Until the day she drug me down the middle of the road into oncoming traffic. Luckily my older cousin was clearing the barn and ran out to grab her, only to see me lying in a ditch, bloody with four broken fingers. That was the end of that. After a call to my mom to come get me the conversation turned to “This horse is going to kill you — she is not the one for you.” Weeping I said, “I would take death if that meant I could have a horse.”

Parents know best and two months later I was introduced to my first true love, Dandy. He was an old paint roping horse, 17 hands, all white with a brown head. He had horrible conformation, but to me he was the most handsome horse I had ever laid eyes on. On our first meeting, the cowboy who owned him couldn’t catch him. Dandy kept running past him to the backside of the big pasture. I asked if I could try. I remember walking up to Dandy, softly talking and telling him that it was going to be OK. I stopped 10 feet in front of him and just stood still. It only took Dandy a moment to walk up to me and put his head on my chest. There it was: love at first sight. He followed me without a halter back up to my dad and the cowboy, who said, “I ain’t never seen him do that before.” Weeks passed on a trial period. I rode him everyday. And then came the day when my parents said I didn’t have to take him back — he was all mine!

I had three wonderful years with Dandy. He was a rock-solid, true friend and steady steed. He would come when I called and waited patiently every day at 3 o’clock to nicker at me when I got off the bus. There wasn’t anything I couldn’t try or do with him. And every night, I would go out to feed and he would put his head on my chest.

And then, one Saturday morning in April, he was gone. Dandy had passed away sometime during the night. Thirteen is a tough age to lose the most important relationship in your life. To this day, I can still feel the shock and sadness for the day my best friend and partner died. Sure there would be other horses, but there would only be one true horse love. Or so I thought…

Fast-forward 24 years and my life was filled with marriage, career, daughters of my own and a move from Seattle to Nashville, Tennessee. It was my 6-year-old daughter that ignited the flame for horses once again. She begged to start riding after taking a pony ride at the fair. You could see it in her eyes, that love and passion that I had so long ago.

Three phone calls later she started her lessons. I loved to watch her ride, and I loved just being around a barn again.

It wasn’t until we changed barns and the new barn owner, Susan, asked if I ever rode. I explained that I used to ride as kid but hadn’t been on a horse in 24 years. She just smiled and said, “No time like the present! Let’s get you riding!” I cried the first time I sat in the saddle. A flood of memories and emotions flowed. It was like something had given me my breath back. I knew right then and there I couldn’t go one more day without horses in my life.

After several long conversations with my husband and a promotion at work I was able to afford to start the process of horse shopping. All the time in the back of my mind was the belief that I would love a horse again but there could only be one true horse love. As we searched, I spent time at our barn riding and watching my daughters blossom into full-fledged horse crazed little girls.

It was there that I met Thunder. He was a barn horse that was inherited from a boarder who lost interest and left him, eventually selling him to Susan and her ranch manager Russ. Standing up against the paddock while watching lessons, Thunder would nibble on my hair when I was turned away. As soon as I turned around he would pull away like “Who me?” Those little games would go on for weeks. If he was in the big field where the arena was, he would walk up to me and stand close. If I came by the paddock he would nicker for me and follow me to the gate. Over the course of a month, Thunder and I became close buddies.

I didn’t know Thunder was for sale and I never told Susan that I even wanted him until we looked at yet another “possible” horse. On the way home I just came out and said, “You know whom I really love… Thunder.” To my surprise,  Susan said, “Why don’t you ride him for a while and let’s see how it goes?”

I rode him any chance I could get, but mostly we would just hang out. My girls and I would brush him for hours, take him for walks to the tasty grass out front and just spend time taking care of him. He came when I called and when I left he would put his head on my chest for one last pat. Yes, it was true love.

Thunder was my Valentine’s present in February 2011. I can still remember my husband giving me the go ahead to purchase Thunder and the tears that fell. Besides my girls, it was the best gift Bill has ever given me.

My wonderful husband now puts up with another “guy” in my life and three horse crazy girls that spend more time at the barn then anywhere else. Add a paint pony to the mix and he sometimes wonders where all of our extra income goes. I once heard it said that every horse in its lifetime deserves to be loved by a little girl. I think that in our lifetime every girl deserves to be loved by a horse.

Thunder is my forever horse. People are always amazed by Thunder’s reaction when he sees or hears me. He just doesn’t come when I call; he runs to me, nickering and calling to me the whole way. After the purchase, Susan said that she had never seen Thunder react to another person like he did to me. She didn’t say anything until after I made up my mind, to make sure to not persuade me, but to allow the process to take care of itself. I am eternally grateful for her and Russ for allowing me to purchase Thunder. I still think he wasn’t really for sale but Susan is a horsewomen through and through and maybe she saw something special, or maybe she just noticed the way I came to life just being around him.

Yes, true love did come “a thundering” into my heart for the second time. Sometimes, when I stand real still with Thunder’s head on my chest, I can see the face of Dandy, smiling back at me, and as the tears run down my face I think… how blessed am I to be loved by a horse — twice.

Tabetha Taylor lives in Franklin, Tennessee with her husband Bill and their two wonderful equine passionate horse girls Bella, age 10, and Ellie, age 7. She started riding at 10 but took a 24-year break. Coming full circle, she now is an active 4-H show mom and owner of two wonderful horses, a quarter horse named Thunder and a quarter paint pony name Chico. She enjoys trail riding with her girls, barrel racing and supporting her girls as they show in many disciplines from hunter-jumpers to ranch and trail.