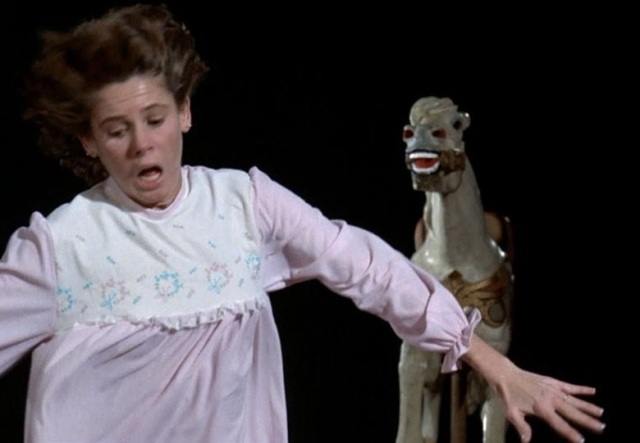 Dark Vengeance, a creepy episode from the 1972 TV series Circle of Fear, is up first in our countdown to Halloween.

We start the episode with Frank the construction worker, played by Martin Sheen, who digs up an old crate at his worksite. The box mysteriously has no hinges or latches.  It can’t be opened.  Frank is reluctant to break open the crate, but finally does so at the urging of his wife Cindy’s request. Anybody who knows horror movies knows this is going to end badly.

But… oh look… he only finds a miniature rocking horse. Cindy immediately freaks out and wants him to put it back.  Funny thing, though, it will no longer fit in its box.

That very same night, Cindy has a nightmare that the rocking horse grows to Trojan Horse sized proportions and tramples her! The real horror is that night gown. Ammarite?

Things just start getting more freaky. The rocking horse randomly moves itself, it continues to grow in size, and its eyes start glowing red! Duh-duh-DUH!

Meanwhile, Cindy realizes the horse is from her past.  She used to play with it at Uncle Roy’s house, but then she moved away and she never saw her cousins again.

Where are Cindy’s cousins?  What does Uncle Roy have to do with this?  Is the rocking horse a malevolent cursed object bent on revenge?  I mean, you’ll just have to watch and see!

On a visual level, I love these old 1970’s horror shows. There are no CGI special effects and the horse is clearly being moved at the hands of a puppeteer. Still, it’s always just there when you turn around, freaking people out! Cindy goes into the kitchen and THERE. IT. IS. Frank turns on a light in the garage and it has mysteriously broken loose from a vice clamp!  You are left with your imagination and one really creepy soundtrack to help fill in the gaps.

Give Dark Vengeance a try tonight!