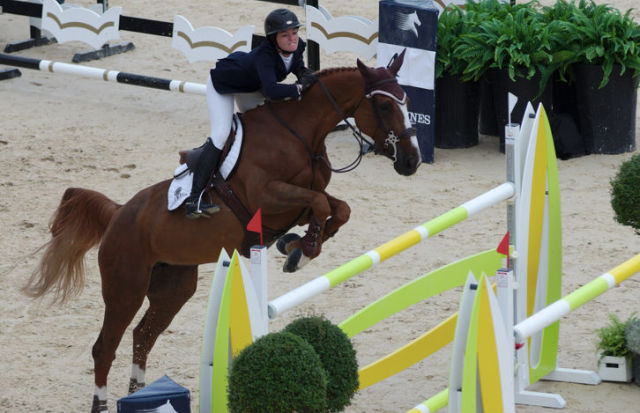 This Friday night at the Washington International Horse Show, Reed Kessler placed fourth in the $50,000 International Open Jumper Speed Final, which is pretty much a normal everyday occurrence when you’re the youngest-ever showjumper to compete in the Olympics. But she did get to try a new challenge in the second-annual celebrity barrel racing exhibition.

And of course, being Reed, she finished with the fastest time and won herself a custom WIHS belt buckle:

The competition was part of the WIHS Military Night with an Army vs. Navy theme, and professional barrel racers teamed up  up with celebrity hunter-jumper riders to run the barrels for a $2500 prize and custom belt buckles.  Reed caught a ride on  Quarter Horse named Mose O’Day.

Cowboy hats off to you, Reed! Hopefully we’ll see even more interdisciplinary exhibitions at other big shows!