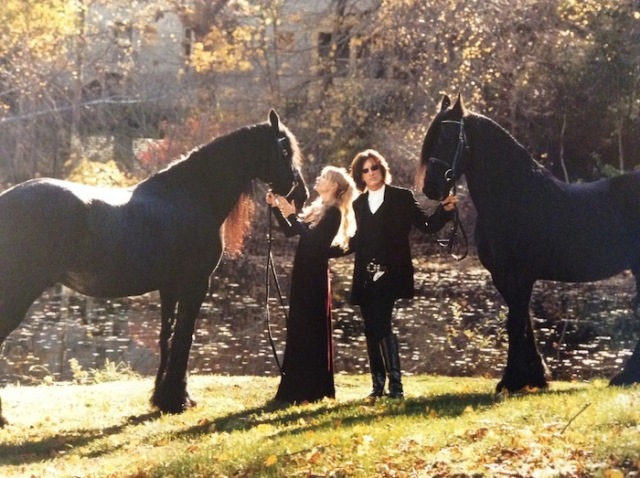 Joe Perry may be the star guitarist in a little known band called Aerosmith, but he’s also an equestrian.

Excerpts taken from People We Know, Horses They Love by Jill Rappaport and Wendy Wilkinson.

Perry and his wife, Billie, moved to their ranch outside of Boston in 1987 and immediately fulfilled a lifelong dream when they bought a Quarter Horse and a Paint. But after watching the classic movie Ladyhawke, the pair fell in love with another breed — the Friesian.

Finding a Friesian in 1987 America, however, proved difficult. Joe told People We Know, Horses They Love, “This was before the Internet, so it took Billie and I a while to see one in the flesh.” The chance would finally come in 1990, when the band was on tour in Nashville, Tennessee. Afterwards, finding Friesians while on tour became a hobby for the rock star couple.

Their first Friesian purchase was made at a dairy farm in southern California. Billie states, “Magnum was the horse that Joe rode for years. Then we got Nico…. Our next Friesian, Orien, was two years old when we bought him. He was a half brother to Nico, and we have had him for 13 years.”

All of their originial horses were bought stateside. Billie finally took the plunge on an imported Friesian when she fell in love with Franz, a relationship that almost ended in tragedy. The horse almost died in the process of being gelded. It took nine months of medical care before Franz was fit to travel from Germany. Billie had this to say, “After that Joe and I made up our minds that we were never going to sell our horses. Orien and Franz are part of the family, and they are staying with us until they go peacefully into the night.”

At the end of the day Joe Perry may be a jet setting rock ‘n rolla, but he still has to take care of the horses. I loved this random video of Joe accepting an award from afar.

Joe adds, “To see a Friesian is to love it. Just being around Orien and Franz is therapeutic. I like coming down the driveway and seeing them greet me. They are artistically beautiful.”

Take a look at this Animal Planet interview:

Billie loves the fact that horses bring the whole family together. All of the Perry children ride and help their parents with barn chores.

She notes that horses have been an integral part of her marriage as well. “For Joe and I, being with the horses is something that we both love and enjoy together, and this bonding experience makes our relationship that much more special.”