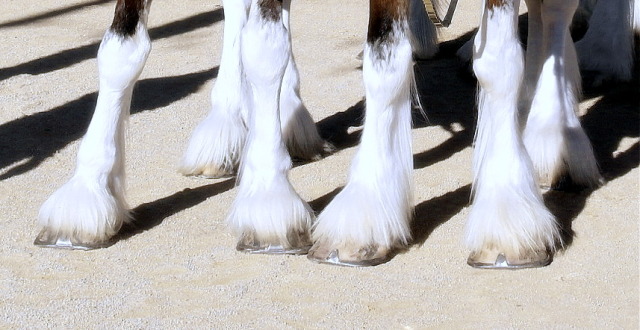 Shoeing a draft horse isn’t like just shoeing a really big horse. Here are five ways the process can be totally different.

Draft horses can be trimmed and shod just like a regular riding horse — if that’s their intended purpose. But shoeing the draft horse as a working animal can call for other needs, from the kind of shoe to the farrier himself.

1. If you’re planning on driving down the road, you’ll need borium.

Not to be confused with the elements barium, bohrium, or boron, borium is a farriery product that’s made of tungsten carbide granules or “chips” in a softer metal like steel or brass. Borium comes in a rod, which is then melted by the farrier and applied to the shoe, usually at the toe and heels. The tungsten carbide provides traction for the horse’s metal shoes on an asphalt surface — kind of like short track spikes for going down the road that are built-in as part of the shoe. Borium can also help extend the life of the shoe by reducing some of the normal wear. For driving on paved roads or driving anywhere in the snow, borium is a pretty standard addition to draft horse shoes.
Ignoring the shavings on this mare’s feet, the borium chips are visible at the heel:

2.  Show horses will wear Scotch bottoms to exaggerate their action.

Show horses should have high action, and they can be shod in ways that can help them perform to the highest level of their ability. An entire article could be written on Scotch bottom shoeing alone, but here are the basics: This kind of shoeing gets its name from a shoe that’s “scotched” or made in such a way that it extends beyond the horse’s hoof wall to increase the size of his hoof print. Typically, the Scotch bottoms are nearly square across the front; the hind shoes may be missing the rear quarters to help the horse accentuate close-set hocks. To encourage the foot to grow into its shoe, technical farriers will plan a cycle with Scotch bottoms over the course of several shoeings; however, especially for showing young horses, the shoes can be applied just in time for a show and then removed a week or two later. Showmen will use putty to temporarily fill in the section of hoof that did not grow into the shoe. While the Scotch bottom shoe originated in Europe where draft horses were working in soft and boggy conditions, the shoe today is used strictly for the show ring and hitch horses are almost guaranteed to be wearing them. Even the Budwesier Clydesdales rock the Scotch bottom:

3. Shoes for pulling horses include caulks to help them dig in and “squat.”

Pulling horses are at the opposite end of the spectrum from show horses, but also require a specific shoe to meet their needs — namely, the addition of toe and heel caulks to give the pulling horse some extra traction so he can dig down low and pull with all his might. These are more like the big chunky cleats of a football player, and off the pulling track these horses sometimes look a little bit like they’re walking on their toes. This kind of shoeing has much more traction than what you’d want on a road horse or field horse — there’s increased risk for damage done if a horse steps on his partner wearing caulks. Caulked shoes are often found on logging horses as well for added grip in the wintertime woods.

The use of stocks can be a little controversial — critics typically argue that if a horse is well-trained and the owner works with a horse’s feet, stocks aren’t necessary. I know there are many draft hitches in the country that are shod without the use of stocks. However, many drafts are still shod in stocks, and when used correctly, they’re a valuable tool that saves a lot of wear and tear on your farrier. (Many farriers refuse to even attempt to shoe drafts without stocks.)

The concept is simple: the stocks keep the horse still while providing a place for him to lean. The foot on which the farrier is working is restrained and supported, preventing the farrier from needing to hold up the horse’s leg to work on it. (From my recent personal experience of trying to hold up a draft hoof while applying a poultice pad and vet wrap, I can say first-hand that stocks would have been extremely helpful, if perhaps a little bit of overkill.) Horses need to be trained in the stocks as much as they need to be trained for the farrier, but when the tools are used correctly and horses are well-conditioned to being in the stocks, they make the job of shoeing a one-ton animal a hundred times easier for the farrier.

Check out this video of a draft horse being shod in stocks:

5. The Amish are some of the best draft horse farriers around.

In our neck of the woods of western New York, we’re lucky to have a number of Amish communities within a half-hour’s drive in a few directions. Since the Amish rely on their draft horses as important working partners on the farm, they have become experts on hoof maintenance. Our local Amish farriers can get all four horses done within an hour or two (depending on if they’re resetting or forging new shoes) and can shoe either with basic borium shoes or the Scotch bottoms (we’ve never asked them for pulling caulks but I’m sure they could do that too). In addition to being expert farriers, the Amish are also top-notch at making and repairing harness and collars as well as custom-built show carts and wagons — for a community based on horsepower, it makes sense that they’re the best at what they do.