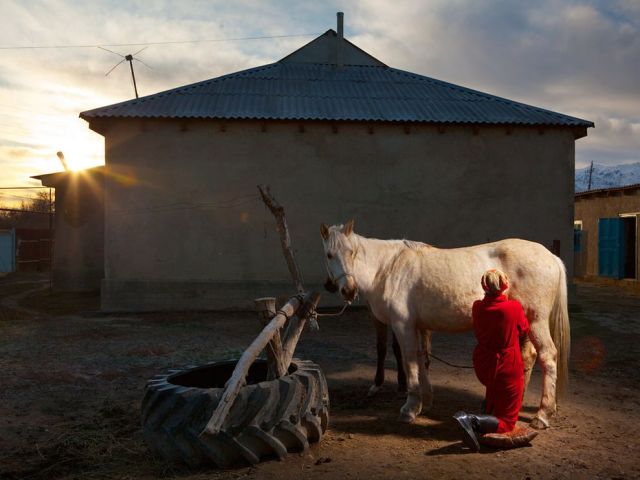 Relative to other animals, horses weren’t domesticated all that long ago.

It’s difficult to think about life without horses, but archaeological evidence has proven horses are relatively new companions for man.  Let’s take a look at some ancient horse history.

The latest guesstimate puts horse domestication at 5500 BCE. That is after man tamed the guinea pig, chicken, cat, cow, goat, pig, sheep, bees and the dog. In comparison, the dog was tamed prior to 33000 BCE.

So… where did it all begin? Turns out the first horse was ridden in Kazakhstan by peoples of the Botai culture.

While horse herds in that region had been hunted for thousands of years, the Universities of Exeter and Bristol (UK) led the research that discovered evidence of thong bridle use suggesting horses may have first been ridden in 5500 BCE.

The research centered on bit damage.

Wear facets of 3 mm or more, according to research, occurs exclusively on bitted horses.

The archaeologists also used “lipid residue analysis” on Botai pottery. They discovered traces of fats from horse milk, proving mare’s milk was an essential part of the Botai diet. In modern Kazakhstan, mare’s milk is still a part of the daily diet. It is also fermented into an alcoholic drink called ‘koumiss’ for celebrations.

Dr. Alan Outram of the University of Exeter reported to Science Daily, “The domestication of horses is known to have had immense social and economic significance, advancing communications, transport, food production and warfare. Our findings indicate that horses were being domesticated about 1,000 years earlier than previously thought. This is significant because it changes our understanding of how these early societies developed.”

It is worth noting that in 2011, the Saudi Commission for Tourism and Antiquities claimed archaeologists excavated a site suggesting horses were domesticated 9,000 years ago in the Arabian Peninsula. To my knowledge this claim has not been verified by any outside universities.