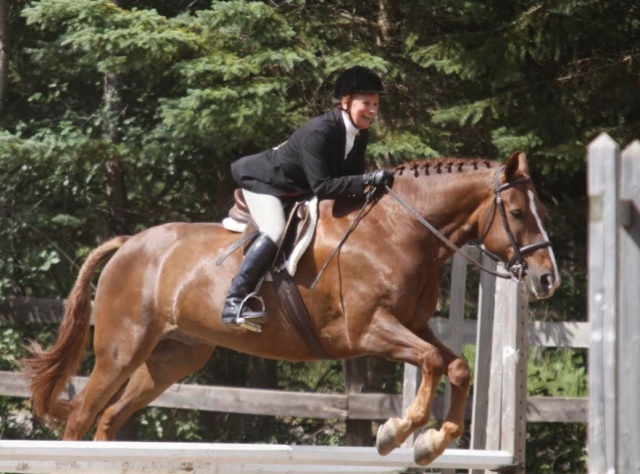 Louise Perron of Quebec shares the story of her “miracle horse” Buddy, a rescue whose transformation from skin-and-bones scaredy-cat to show horse is nothing short of remarkable.

Most equestrian enthusiasts develop a lifelong interest in horsemanship. I believe the special bond that we build with our horses could be one of the reasons. Without a doubt, it has been the case for me.

Bit by the Bug

I began taking a few riding lessons when I was 10 years old, on Côte- Vertu Boulevard, then a narrow country road lined with riding stables and farms. My love for horses and riding them was instantaneous. I would ride even in the winter. Once I remember getting off the horse after a lesson and collapsing to the ground because my feet were frozen. But the pain did not stop me. I always wanted to go back, time and time again, to my parent’s dismay.

As I became a teenager, my equestrian friends and I would gather and talk about horses endlessly. We could rent a horse for $2 an hour! Those livery horses hated leaving the barn. Sometimes they even charged back into the barn with us still on them. In spite of our minimal riding experience, we quickly realized that we had to duck when the door frame was in sight. By trial and error, we learned how to stay on and have the horses obey us… a little.

While we were in high school, we would each rent a horse for the summer. A six-kilometer bike ride on a narrow Côte-Vertu Road would lead us to the stable. We would then spend five hours riding our horses. In those days, Highway 40 was just a dirt road. We could ride for hours all the way to Ste-Anne-de-Bellevue. The forest would offer an array of trails and jumps. We thought those poor horses had the same stamina as we did. They must have been so exhausted once we were done with them.

After completing high school, I was lucky enough to go to Virginia to attend Jane Marshall Dillon’s renowned Junior Equitation School. Ms. Dillon initiated the career of several American Olympic Team riders. I thought I knew something about being an equestrian but I learned quickly that I knew nothing. So for two years I was taught how to ride properly, how to school a horse, correct problem horses, and teach riding. I loved it.

As the years passed, I had to get a real job. Starting out in life, I could not afford the combined expenses of owning a horse and a car in addition to the usual living expenses. Employment in the equestrian field was rather scarce back then and not very lucrative. But I knew in my heart that someday I would get back into horses.

Some 20 years later, a dance partner mentioned he had a horse and a hobby farm. He invited me to visit his farm and offered me a ride on his horse. I realized quickly that the passion was still alive and well. I started to ride his mare regularly. Applying the skills I had learned so long ago in Virginia, I managed to improve the horse’s behaviour dramatically. She calmed down and learned how to jump. I was even able to give riding lessons to children using this horse. Eventually, the two boarders at this hobby farm had to move to another location, leaving the mare alone. This did not agree with her so my friend and I set out to find a companion to keep the mare company.

There was an old farmer nearby who had several horses for sale. We went to have a look. The barn was very old, dark, dirty and smelly. The horses were all in standing stalls with their heads tied facing a dark wall. They were skin and bones. Not only could you see their ribs clearly, they also had bones protruding all over their bodies. In addition, they were in desperate need of a hoof trim. Their coats were just caked with manure, a very sad and unfortunate situation. We decided to get at least one horse out of there and chose the tallest one with the pretty head. A veterinary check-up was ordered and despite his poor condition, “Ross” passed the test.

We paid the old farmer his $800 and off we went with Ross soon to be re-named very appropriately “Muddy Buddy.”

Poor Buddy was so weak his hind legs splayed outwards. He was so skinny his front legs almost touched together. His coat stank but since it was winter, a shower was out of the question. It took months of brushing to get him clean. He was two years old and afraid of everything. Brushes, combs, Show Sheen, blankets, the noise of the Velcro on leg wraps, all were enough to make him fall to his knees in fright. Other times, he would take off in a fit of uncontrollable fear, breaking the halter or dragging along whatever he was tied to.

I would stand for hours in a tiny indoor arena trying to entice him to come to me, giving him treats to gain his confidence. After a while, I started standing on a stool next to him to teach him the height of a rider with the possibility of mounting him some day. It took a lot of patience as well as many repetitions to tame him. Finally, the time came when I could envisage tacking up Muddy Buddy. I purchased a secondhand all-purpose saddle for $100. It is the most comfortable saddle I have ever owned and I still use it for trail riding.

The day arrived when it was time to mount Muddy Buddy. Luckily it was in a very small arena. He was afraid of everything, real or imagined. All would be calm and he would suddenly take off at a gallop towards the other end of the arena. Those walls came up fast. I was sure I was going to get smashed head first. I would just have time to straighten myself up in the saddle that he would take off again. Being in my fifties and breaking a two year- old horse made riding an extreme sport for me. That is how we spent our first winter. Come spring, it was time to go outside. My friend, a big and strong guy, held the lunge line while I tried to ride Buddy. Well, another fearful spook and both my friend and I got dragged around unable to control this poor frightened horse.

Eventually we were able to undo the lunge line while I was riding but there were still many spooks during our training sessions. Everyone knew to get out of the way when Buddy took off in fright. Pulling on the reins or trying to turn was to no avail. All I could do was stay in the saddle until he stopped galloping.

Despite the spooks and speedy gaits, Buddy started to learn voice commands for the walk, trot and canter. After a while he was taking the correct canter lead and he was a natural at jumping. In fact, he loved it. He gained weight, he grew a little, his coat looked better and his legs started to straighten out. Some people still referred to him as my pony because he was small and fragile looking but he measured 15.3 hands which was large enough for me. However, by horse show standards and maybe by style, most people think a horse taller than 16 hands is better.

Into the Show Ring

With occasional coaching assistance, we were ready for our first dressage competition. Getting Buddy into the trailer to travel to the show grounds was a 45 minute ordeal each way. I was terrified at the thought that he would get spooked and tear around the show grounds uncontrollably. It turned out that there was so much going on at the show that Buddy, in his bewilderment, remained relatively calm. At his first horse show, we won two third-place ribbons. We continued our dressage training and we won championships at different levels as time went on, still using that $100 all-purpose saddle! At one of the shows, the judge, who had not seen Buddy since he was small and fragile looking, inquired as to what I had been feeding him. Buddy was looking very healthy, strong and solid.

I did most of the training for jumping myself. It was easy since Buddy loved jumping so much. There was not a paddock that could contain him. We would put him in one paddock and when it was time to bring him in he would have moved two paddocks away. He could jump three feet from a standstill. He did that once and it cost me a concussion and three broken ribs. Once, loose in a large indoor arena getting some exercise, he looked over the door at the other end and saw green grass. He backtracked to give himself four strides and jumped the door to get to the grass. That door was four and a half feet high! Another time, while he was having his stall cleaned, he decided to jump the wheelbarrow parked in front of his stall doorway. His feet got tangled in the wheelbarrow and he landed on his back on the cement alleyway. All this keen jumping ability enabled him to get a second and fourth-place ribbon at his very first jumping competition and many championships thereafter.

He is a horse with a big heart, maybe because of his background. We even did a trek together once. Several cowboys showed up for the competition and appeared to have experience in such events. Well, Muddy Buddy and I won the championship again. My spooky little horse had confidence in what I asked him to do, such as open gates, jump different obstacles, gallop under poles, to name a few.

Muddy Buddy and I have been together now fourteen wonderful years. When I arrive at the barn and call his name he whinnies to me. When he is out in the paddock I call him and he comes galloping, getting all excited. He has learned several tricks which he performs happily for treats such as smiling, shaking hands, bowing and standing stretched like a Morgan horse. If he suspects people have a treat for him, he will follow them anywhere and should they start running, he will chase after them like a cutting horse. He is the mascot of the barn.

Muddy Buddy at 16 and I, no fountain of youth, are training Level IV Dressage. We both love what we are doing. He is so fit, strong, well fed and happy now. At a horse show last summer, after winning a championship again, an experienced equestrian wondered if he was a stallion.

My little miracle horse Muddy Buddy has lived a life transformation. He went from being a skinny, scared horse who could have ended up who knows where to becoming a champion. He has given back to me even more than I gave him. He has fulfilled my dreams. We are growing old together and we will be inseparable until the end.

My name is Louise Perron. I live in the Laurentians in Quebec. In my late teens I trained in Vienna, Virgina with Jane Marshall Dillon. I returned to horses in my late 50s and I was in my 60s when I won many championships. Buddy and I were lucky to have each other.