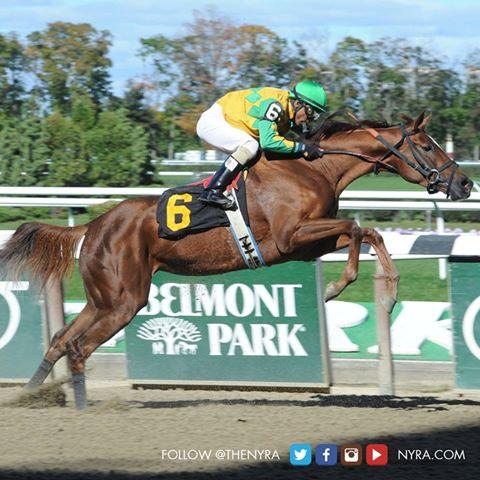 Some off-track thoroughbreds start training for their second career after racing while STILL racing… like this 3-year-old filly.

Kate is a Ten, a 2010 Thoroughbred filly, was running down the stretch at Belmont Park on Sunday, October 19, when she decided that it would be more fun to jump a shadow on the track than just run over it. Her mighty leap could have cost her the race, but she settled back down into a nice gallop and won handily. Now that’s an athlete!

Kate is a Ten taking the leap at Belmont Park.

Photos used with permission from the New York Racing Association.

We imagine that a career in steeplechasing might be in her future….

It’s not the first time a horse a racehorse has gone shadow-leaping. In the 1990 $1 million Breeders Cup Spring, Dayjur (the dark bay with blue and purple silks) was pulling ahead in a homestretch dual for the win when he jumped a shadow 50 yards from the finish, losing his lead in the process. (Watch the full race here.)

Oops! But perhaps the most infamous uncalled-for leap took place at the 1956 Grand National, featuring the late British jockey turned crime writer Dick Francis riding Queen Elizabeth’s horse Devon Loch. Just yards from a win (“Devon Loch can’t lose!” cries the announcer), Devon Loch inexplicably jumped into the air, as if there was a ghost-jump in front of him, and bellyflopped to the ground. The horse behind them swooped past them as Devon Loch scrambled to his feet but, alas, it was too late. (Watch the full race here.)