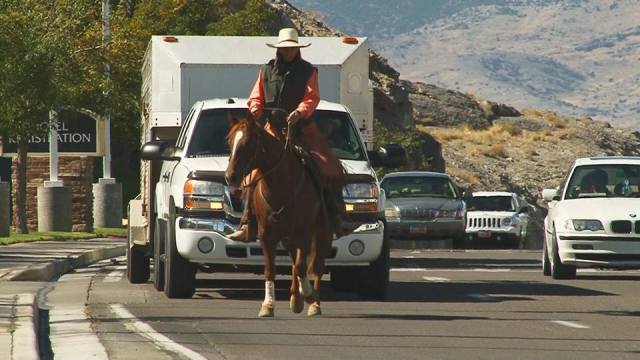 Yes, really–to the confusion of D.C. reporters and drivers alike.

Anyone in a 50-mile radius of Washington, D.C. is no stranger to rush hour traffic. Ninety-minute commutes each way for suburbanites, spending 30 minutes to drive under 10 miles, and rubbernecking over absolutely NOTHING are completely normal.

But when I was listening to the radio early Thursday morning, and heard a completely bemused traffic reporter say, “We don’t normally have horses on the highways, so expect delays,” my ears perked up. What the heck?

Seems like a lone rider will be responsible for delays from Prince William Co. to D.C. http://t.co/P7V7IoaZ6Q pic.twitter.com/2AXNI6LKiO

Turns out, the Grass March Cowboy Express was staging a protest in D.C. against federal overreach on public land. The core 10 members of the group (which included a driven mule team) rode 13 to 18 hours a day over the 2800 miles  from Bodega Bay, CA to Washington, D.C., ending in Annapolis, MD.  A few support vehicles followed them for safety, and volunteers  joined them at each stop.

I caught the Grass March Cowboy Express on their way down Constitution Ave. this morning. The relay march started in September in San Fran and is reaching DC today to raise concerns about ranchers’ grazing rights. #grassmarch #cowboyexpress View on Instagram

Over the years, the relationship between the federal Bureau of Land Management and cattle ranchers has become more and more contentious, as ranchers use public lands for their livelihood, and believe the land would be better managed at a state rather than federal level. In this march, organizer and Elko County Commissioner Grant Gerber called for the resignation of Battle Mountain BLM District Manager Doug Furtado, who ordered that ranchers remove their cattle from Mount Lewis, Nevada this summer.

“It’s extremely serious, but we’re trying to make it fun as we go,” Gerber said in an interview with the Elko Daily Free Press. At the stop in Salt Lake City, Gerber said, “…the best part so far was going across the desert in the Salt Flats. It was fast.”

Whether or not you support their cause, you’ve gotta admit–that’s an amazing journey. And at the very least, I’m sure it made rush hour traffic a little more pleasant for anyone who saw them–if not any faster.