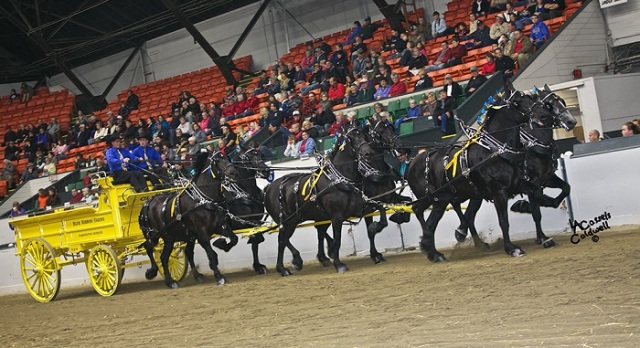 It may not be as big as the AQHA Congress, but in some ways it’s so much bigger.

From October 6th through the 11th, the Eastern States Exposition (better known as the Big E) in West Springfield, Massachusetts temporarily became the draft horse capitol of the world as the World Percheron Congress moved in. Over 800 entries filled the barns and arenas over the course of the week to compete in just about every class you can do with a draft horse: halter, hitch, under saddle, the world championships in Percheron barrel racing, draft pulls, plow contests, feed team races and a logging obstacle course. Entries came from as far away as Alberta, Canada and California, with spectators coming from nearly every continent to experience the WPC.

Try not to drool over the supreme champion mare, the lovely and bodacious YF Hillary’s Isabel, owned by David Anderson of Ohio:

In addition to the show itself, the expo center was filled with shopping opportunities, educational expos, demonstrations and special events. The WPC dedicated each day of competition to a different branch of the armed forces, with a special hitch wagon used to honor veterans in the opening ceremonies. A Drive for the Cure event drew dozens of entries in support of breast cancer awareness, turning the entire show pink. (Pink ribbon mane rosettes — inspired!!)

Of note was the Celebrity Drive-Off, which placed some well-known local and national celebrities in the driver’s seat to take the lines on a timed obstacle course. (RFD-TV’s Gentle Giants host Kadee Coffman won “Worst Celebrity Driver.”) You might recognize these drivers: in the background is the famous Dr. Pol, losing to his lovely wife who is driving the team in the foreground. (Loving the white-knuckled grip of the assistant — this class was made possible by teamsters donating the use of their wagons and horses!)

Shout out to the event’s winner, Dr. Wendy Ying, co-host of Horse Radio Network’s Driving Radio Show. Wendy and Horse Nation’s good friend Glen the Geek were broadcasting live from the show all week — check out the episodes here.

For anyone who’s ever ridden in a coliseum arena and felt like it took about a year to get from one end to the other, I’ll share a secret for making the space feel smaller: fill it with six- or eight-horse hitches. These hitch classes were run in heats, with no more than three hitches performing at any one time — the arena simply couldn’t hold any more than that! The Supreme Mare 6-horse hitch was won by one of my favorite hitches in the country, Blue Ribbon Days:

Youth competitors took to the arena for the under-saddle classes, demonstrating the versatility as well as the tractability of the Percheron as a breed. Tyrone Fields won the Western Pleasure class with Jen’s Danny Boy:

And, of course, to entertain and enthrall and give us all gray hairs, there was this guy: