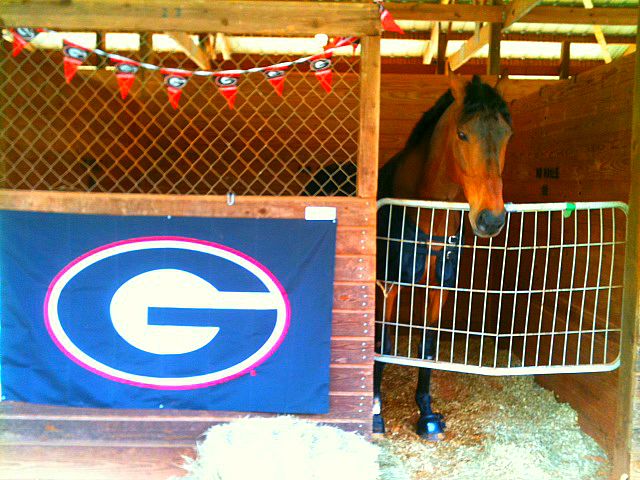 Kansas State University has already made headlines by dropping its equestrian teams. Will more schools follow, or is there hope for varsity equestrians?

The NCAA’s Committee on Women’s Athletics (CWA) announced earlier this fall that it recommends the removal of equestrian from its list of emerging Division I and II sports. An “emerging sport” refers to a sport under a grace period in which it must meet a minimal requirement of schools participating under a certain amount of time: in the case of equestrian, a target of 40 schools must have fielded teams in a ten-year period since the NCAA picked up equestrian in 2002. To date, only 22 colleges and universities field such teams, governed by the National Collegiate Equestrian Association or NCEA. In its fall meeting, the CWA reviewed statistics and made its decision that equestrian will be removed from its list of emerging sports at the conclusion of the 2016-2017 season.

A Texas A&M rider sliding to a stop at a show against Auburn. Steven Wilkes/Flickr/Creative Commons License

In response to this announcement, Kansas State University, who has earned five individual national titles and three team Reserve National Championships, has already decided to drop its sponsorship of its varsity equestrian team. Despite the NCAA’s recommended date of 2016-2017, K-State has moved its own deadline to 2015-2016, even as the NCEA prepares to fight the NCAA’s decision. K-State already has plans in place to replace equestrian with women’s soccer to maintain its requirement of 16 women’s teams.

A college equestrian over fences at a show hosted by Auburn. Steven Wilkes/Flickr/Creative Commons License

These announcements have sent shockwaves through the equestrian communities: the thousands of varsity athletes who participate in equestrian are looking at the demise of everything they’ve worked for so far in their riding careers; the millions of dollars that schools have invested in their equestrian teams is essentially going down the drain; young riders who had aspirations of riding competitively on athletic scholarships now must start making new plans. Because of it elite level of competition, NCEA schools have always attracted the top young riders both in western and hunt seat disciplines — nowhere else did these riders have the opportunity to compete at that level in an intercollegiate program.