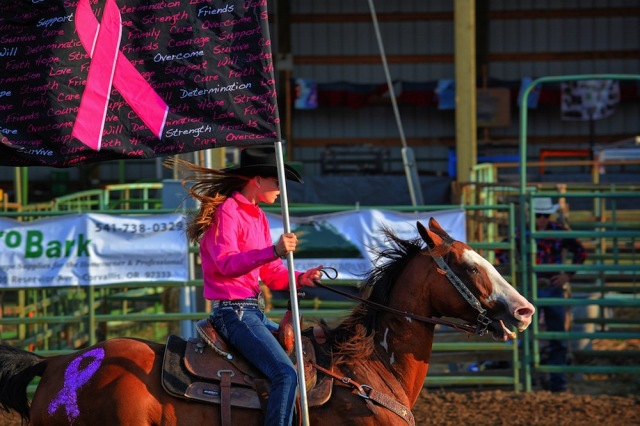 Each Friday Horse Nation teams up with Ovation Riding to spotlight an individual or organization that is doing good work in the horse world. This week we salute the Tough Enough to Wear Pink movement, headquartered in Hughson, California.

Every two minutes, a woman in the United States is diagnosed with breast cancer. That’s a staggering figure. Terry Wheatley knows firsthand what that number really means, having survived breast cancer herself — as well as losing her grandmother to breast cancer, having a mother who underwent a double mastectomy before age 40 and a daughter undergoing two surgical biopsies before age 20. Ms. Wheatley, an entrepreneur, knows better than most what breast cancer can do to a family.

What Wheatley did not immediately realize, however, was how many people breast cancer has affected, directly or indirectly. As the wife and mother of professional rodeo competitors, Wheatley reached out to the then-director of special events Karl Stressman for Wrangler to help contestants at the 2004 Wrangler National Finals Rodeo wear pink in support of breast cancer awareness and research. She expected maybe a quarter of the cowboys to support her request and expected to see a few pink shirts dotting the arena during the show. What she did not expect was to see every single contestant wearing some kind of pink in their outfit, showing a rodeo-wide wave of support for the cause. Tough Enough to Wear Pink was born.

Champion barrel racer Christy Loflin all decked out in pink at the NFR. Photo from Tough Enough to Wear Pink on Flickr, used with permission.

Tough Enough to Wear Pink (or TETWP) has become the number-one fundraising effort in the rodeo community, with roughly half of the Professional Rodeo Cowboys Association’s (PRCA) 600 season rodeos hosting a TETWP program during their show. A not-for-profit campaign, TETWP’s efforts are vast and varied — basically, the organization provides a unifying force for each individual rodeo to get behind, but allows each rodeo to create its own fundraisers. This allows funds to stay in each rodeo’s local community, emphasizing the true family nature of the rodeo and western culture.

The pink colors are presented at a local rodeo. Photo from Tough Enough to Wear Pink on Flickr, used with permission.

Examples of TETWP fundraisers include:

Individual communities have shown immense creativity in coming up with new pink events. The organization is now branching out beyond the world of rodeo: TETWP has supported pink horse shows, reinings, golf tournaments and a motorcycle rally, among many other forms. Since its creation in 2004, TETWP has helped raise an amazing $17 million dollars for breast cancer support and research — and most of that money has stayed in the local communities.

Not just for rodeos–TETWP has spread to horse shows as well! Photo from Tough Enough to Wear Pink on Flickr, used with permission.

Supporting TETWP is easy. Head to their website at www.toughenoughtowearpink.com and find an event near you. Wrangler has a full line of pink merchandise available to help spread the word. You can host your own event with the help of TEWTP as well — why not add a pink element to your fall horse shows, trail rides or events? With October being Breast Cancer Awareness Month, now is the perfect time to show your support.

We applaud Tough Enough to Wear Pink for the great work they do and encourage Horse Nation readers to visit their website and Facebook page to learn more.