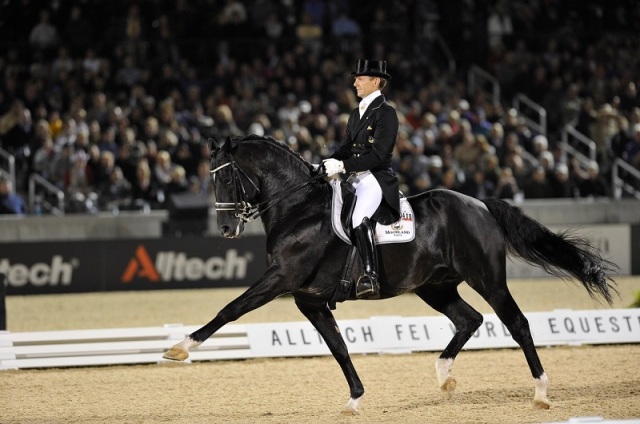 OK, that’s not what it’s called — but it is really dramatic. The crazy part: the drama is real.

No dressage horse has ever captured our collective imagination quite like Totilas managed to during his reign. The horse was a force of nature, a freak show of power and movement that mesmerized spectators and humbled judges. But the passion of his performances was matched by the theatrics of his life, which has been steeped in judgement and controversy.

Totilas has never been “just a horse” but a vehicle for human expectations, dreams and greed. It’s an unfair burden, and although his fans still hope for a happy, fulfilling ending that possibility grows hazier with each passing year.

In mid-August an hour-long documentary about Totilas’ life, from his birth to his performance at Aachen in 2014, was broadcasted on Dutch television to a viewing audience of 800,000. Produced by Annette van Trigt, Totilas: Horse & Phenomenon features never-before seen footage and interviews with the individuals who helped shape Totilas into the superhorse he was — and, perhaps, still is.

Yesterday a copy of the documentary translated with English subtitles appeared on YouTube. Watch it here in its entirety: