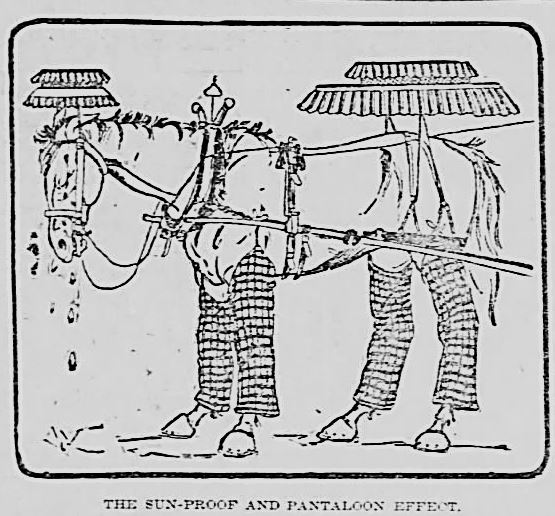 Rescues and Runaways, Bees and Barrels, and quite the to-do over horses wearing hats. No. Really.

A Frisky Mine Horse

“One of the Coney mine horses got friskey Thursday and ran away. He took a notion to loop the loop and got out on the George’s Creek trestle and walked over it about 30 feet before he went through it. It was with much difficulty that he was extracted”

Oh. Oh, how I wish there had been a picture.

The Takeaway: You know how when you ask for training advice on Facebook, you get the same weird comment OVER AND OVER again? This is like that, but in person.

A Battle With Bees

“Lola, Kans., July 18 – C. C. Ausherman, a candidate for the Republican nomination for county treasurer, passed through an experience Saturday afternoon with a swarm of bees which will furnish no abundance of food for thought among those interested in bee culture. Mr. Ausherman was at the Archer home, south of Moran, and had tied his horse in front of the residence while he walked to one of the fields to talk to Mr. Archer. When he returned to the buggy, a swarm of bees were making an effort to swarm on the horse’s head. Mr. Aushcerman secured an apron from Mrs. Archer, which he placed over his head and proceeded to help the horse in its battle with the bees but the bees were too many in number to be fought off with bare hands. However, they were finally driven away by burning a bundle of old rags about the animal’s head.

“The horse’s head, neck, and shoulders are considerably swollen as a result of the numerous stings received and the tongue so badly swollen that is almost impossible for the animal to close its jaws. Mr. Ausherman stated that unless blood poison set in the horse would suffer no permanent injury.”

Length of a Horse’s Head

The Intelligencer of South Carolina, 28 Oct 1896

“It is probable that at first thought most persons would be inclined to doubt the accuracy of the old saying that a horse’s head is as long as a flour barrel. Flour barrels vary somewhat in length. Some are made stouter and shorter, some slender and a little higher. An average flour barrel is about twenty-nine inches in height. A man to whom the old saying was familiar made up his mind to see for himself just how near right it was, and he measured the heads of three horses. One of these horses was said to have a rather large head for its size; it wasn’t a very big horse. The horse’s head exclusive of the ears, measured 28 inches in length. The heads of the two other horses, which were horses of fair average size, with average heads, measured, one 27 inches, the other 271/2 inches. So that this investigator discovered that the old saying was substantially true.”

Wow. I’m so glad someone finally cleared up one of the greatest mysteries of human and equine history in such a scientific manner, because that’s been bothering me for DECADES.

A Horse’s Adventure in a Deserted Shaft

“Over three weeks ago a gentleman living in the Third Ward missed a pony, and, after a long search, gave it up as stolen. Twenty days after the loss of the animal a number of children were playing in some old deserted shafts, when, upon looking into one about six feet deep, a horse, reduced to a mere skeleton, was found. Their discovery was soon made known, and in a few minutes a number of miners collected at the spot and soon had the poor animal on the top of the ground. The person who had lost his pony so long before recognized his property in the emaciated animal before him. For twenty-five days had the animal been in that shaft without food and water, and from appearances it could not have held out many more. It had eaten all the hair from its sides and tail, which, if any, was all the nourishment it had got during that long period. After being taken out it commenced to eat, though it could scarcely stand on its feet. The animal is gaining rapidly in flesh, and it will soon be as strong and useful as before its strange adventure. –Joplin News.”

I have a few things to say about this: A) either we don’t make them like we used to, or your pony doesn’t really need five feedings per day plus supplements or B) on a non-horse related note, “A NUMBER OF CHILDREN WERE PLAYING IN SOME OLD DESERTED SHAFTS” — we clearly don’t make children like we used to, either.

And finally, a turn-of-the-century controversy about Equine Sun Bonnets. Apparently, they became all the rage in 1890s France, and they varied from simple straw structures with holes for the ears to elaborate top hats and feathered masterpieces that rivaled any Las Vegas showgirl.  Behold some of the goodness:

By 1902, the Leavenworth Times had picked up the story with tremendous mockery, stating “All the concentrated warmth of the universe seems to be pouring down on a horse’s head as he staggers along the city’s streets, but life is made worth living only when one can make something of an impression.” The accompanying sketches of the supposed French fad are priceless:

“IN THE REMOTE COUNTRY DISTRICTS”

“THE SUN-PROOF AND PANTALOON EFFECT”

“ACCORDING TO THE ADVICES FROM PARIS”

But if only the author of this great French Mockery could have known…the earliest confirmed patent of an equine  sun bonnet was in 1870, by AMERICAN, J. Anderson:

What’s the statute of limitations on requiring one to eat crow?