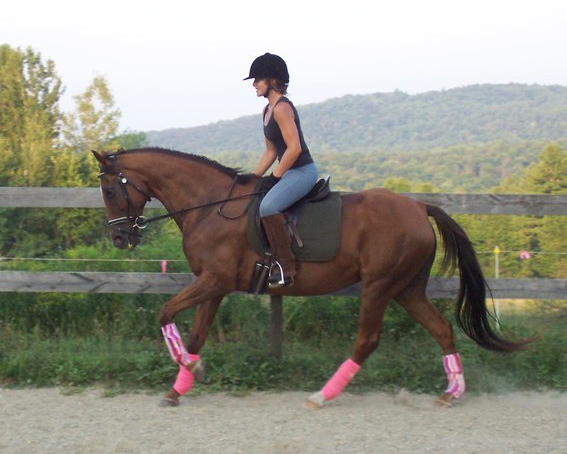 “Life is a gamble, but don’t be afraid to bet on the chestnut mares.” Ashley Holden shares the story of a special horse she found, then lost, then found again.

Call me crazy, but I’ve always had a thing for chestnut mares. On a chilly fall morning, all 16 hands of ‘Cors Kangaroo’ arrived on our farm after purchasing her sight unseen from a breeder. Her previous owner adorned her with a brass nameplate, bundled up in her own couture blanket, it was clear she was a favorite. Cors was the first horse we had bought ‘in-foal’ and I couldn’t wait to meet the surprise package.

The following spring, during the wee hours of dawn, my half-opened eyes peeked at the video monitor and noticed Cors flat on her side, in distress. I woke up my Mom and ran to the barn, frantically dialing the vet’s number. Our excitement quickly turned to sheer panic at the stall door, because what should have been a clear sac was instead bright red. The placenta had separately prematurely, our vet declared this an emergency and that he would not arrive in time. I watched my Mom morph into a calm, collected midwife as she followed the our vet’s instructions and gently tore open the auburn bag, sliding her hand underneath it just in time to reach for the tiny, visible area of white covering that enclosed the foal, a stellar performance and simultaneous near loss. Cors was a trooper and seemed to know we were there to help. This soft, tender encounter with the patient thoroughbred nestled in my heart and further cemented the love I was developing for her.

Her colt inherited her best qualities. Within a week he was coming along well with halter training and picking up his feet. One minute you would be stroking his face in your lap while he slept and then next he would be stealing brushes from the grooming box and flinging them. Cors took her work seriously and tolerated his many unsuccessful attempts to distract her with bucks and sprints while being ridden in the ring. When it came time to wean him, Cors barreled through the electric fence and galloped to the other side of the property to get to her son. She wasn’t about to give up. I had spent hours building that electric fence only to have it be gruesomely torn down. The sight of Cors and her foal frolicking through the lush green grass in the backyard caught me off guard and, for a moment, I forgot I was supposed to catch them. I was in awe of this shiny, spirited mare all coiled and proud, if only she would move that way in the ring!

Cors had a way of keeping me humble. After months of lessons, our first dressage show resulted in her spooking and leaping over the barrier, alas we were disqualified. On trail rides, being on top of her was like driving a stick shift luxury car — just when you think you have reached the top gear, she would dig into the ground harder and fly. On a gallop through the field that I will never forget, she channeled her inner steeplechaser which proved to be the icing on the cake for a cautious teenage girl. I trusted this nurturing mare enough to let loose on a whim and jump over a fallen timber. A few seconds later, Cors would come back to a walk, cool as a cucumber. I, on the other hand, was on an adrenaline high.

Like any mare, Cors had her quirks. She taught me quickly to duck each time I turned her out, always expecting a random squeal, spin and kick toward the gate. Cors was very in tune with her rider. What a treat to have such a sensitive horse. She also trucked around my students around during lessons in a perfect frame, her balanced canter providing the foundation to develop a quiet seat.

As riders, we outgrow our horses and after a few years, I decided to sell Cors. The market was not great for middle-aged horses, especially off-the-track thoroughbreds, ‘a dime a dozen,’ so they say.  One potential buyer drove over three hours to come and see her and after a few wrong turns, arrived after dark. Devoid of arena lights at our backyard barn, we came up with an idea to shine headlights toward the riding ring. Cors went through her paces safely and diligently despite the dimness. The woman decided against buying Cors but we arranged for one of her students to do a free lease. I said goodbye to the big, red, high-maintenance mare who had stolen my heart. Her sweet rider stayed in touch, telling me all about their progress and how Cors was jumping courses like a pro.

One day a few months later, I was informed that Cors had re-bowed an old tendon despite their best precautions. The outlook was grim but the woman recommended a friend whom wanted Cors as a broodmare. Since she would be on stall rest regardless, I agreed.

Initially, I heard about the lucky stallion who was going to sire her next foal and about how she was settling in and as the months went by, the contact faded. I started to wonder about Cors, that empty-pit-in-your-stomach feeling was creeping in. I feared she was unable to carry a pregnancy after her recent delivery but held out hope that regardless, she was in good hands.

One day I received a call from an unknown number. On the other end of the phone line, I heard a lady say, “Hi. Do you know a mare named Cors Kangaroo? I saw an old ad for her online.” Elated, I responded, “Yes, I used to own her.” The lady paused and then said, “Well, I just bought her at an auction for next to nothing. She looked pitiful and I felt sorry for her.” We spoke for a length of time as we tried to fill in the blanks. How did this sweet mare end up on the last train to the slaughterhouse? When I asked the lady what made her choose Cors she said, “I could tell she had solid training — she went around in a frame and seemed like a nice horse. It was her only saving grace.”

The lady who rescued Cors was a trainer and later transferred Cors’ ownership to one of her students. The pair showed on the hunter circuit and I received regular updates.

One evening, over a year later, I had a night’mare’ so to speak, about my first and only ex-racehorse. I reached out to the farm where she was located and I learned that the trainer’s student was going through a bitter divorce, leaving her in financial ruins which left Cors in jeopardy with unpaid bills. The trainer also mentioned that Cors had a recent, nasty bought with Lymes Disease. I learned that the trainer was keeping the abandoned mare behind the pristine show barn, unsure what to do with her. I requested a photo of Cors. There, in a muddy paddock, with her head hung low and ribs popping out, was my once regal mare. The trainer said that “the farrier felt so bad for her that he pulled her shoes free of charge. I can’t afford to give her grain, but she gets some hay.” I shed tears for Cors that day; it was the day that I learned not all people respect and love horses and not all people do the right thing by them. When a responsible party doesn’t pay their bills, horses shouldn’t suffer as collateral damage. But for some, it’s just a business.

In the end, I was able to convince Cors’ owner to sign her over to me. I sent a shipping company across state lines to pick her up. What showed up in our driveway was a mere skeleton, fragments of what used to be. I felt like I had failed her, failed to protect her, failed to make the right decision on her behalf. I didn’t know where to start. Part of me wanted to call the vet and put her out of her misery, but dignity spoke from behind those sad, tired eyes. I brought my old friend into the barn and gave her a spa day, wormed her and set up an appointment for the farrier to come trim her overgrown hooves.

Never underestimate the heart of a thoroughbred. They don’t break down. They aren’t crazy. They are fearless, powerful and resilient. Cors was proof that her breed could win races, stand up to the rigors of steeplechasing, develop the strength and musculature necessary for dressage, show on the hunter circuit, teach lessons to kids and give birth to exceptional foals. She had fight in her, a characteristic she lent me, one that I was not genetically bestowed. Her gentle demeanor healed my guilt, as we once again helped each other blossom, this time in spirit. I have no ribbons to show for what she gave me, the priceless gift of forgiveness.

Sadly, unless we keep our horses forever, we don’t have a say in what happens. I learned the hard way that people do bad things to good horses when they no longer serve their purpose, finances run out or their partners’ bodies ripen with old age. I got lucky. I found Cors and brought her home. Every horse is special, but not every horse has the odds in their favor. Life is a gamble, but don’t be afraid to bet on the chestnut mares. It’s a unique bond that we share with our horses, one that cannot be measured by the amount of trophies on the shelf. Through Cors, I could finally recognize unconditional love between two beings. She continues to be an extraordinary, patient teacher.