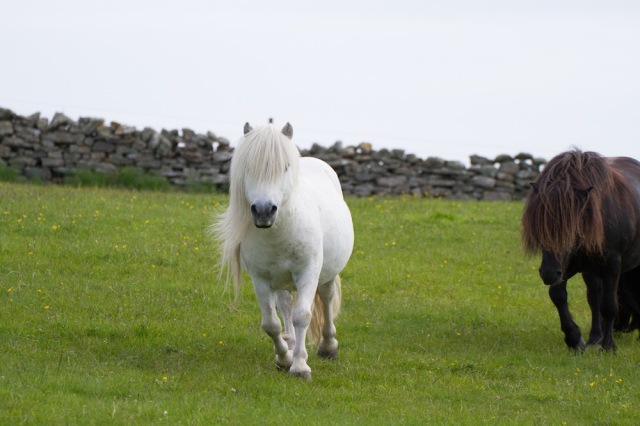 Put the American Shetland and the American Belgian side-by-side with their European namesakes and you won’t even guess they’re technically the same breed.

A variety of factors has shaped two American versions of breeds at opposite ends of the spectrum: the Belgian draft and the Shetland pony. Generally, both American variations of these breeds are more refined: leggier, more delicately-shaped in the head and neck, taller and flashier. But how did this transformation happen? How did the original stocky, plucky horses of Europe become the higher-stepping favorites of American farms and show rings?

Now the most popular draft horse breed in the United States, the Belgian developed in Europe in Belgium (as the name suggests). Most European draft horse breeds developed from the heavy horses ridden by knights, eventually evolving from war mounts to farm workers. Belgium developed stallion inspections by the 1890s, helping the breed develop a standard for conformation, size and overall quality. Belgians were imported into the United States for use on American farms with the American registry forming in 1887 and the breed rapidly became popular as a hard-working draft horse. World War I halted the importation of Belgians, meaning that American breeders now had to breed their own lines. In the 1930s, the breed was again imported before importation was shut down again during World War II. The mechanization of America following WWII nearly ended draft horses in the United States altogether.

At this point in the breed’s development, the American Belgian and the native Belgian looked something like this:

The Belgian was a thick-boned and thick-headed draft, and often criticized in America as too thick and too low-headed. The expression “the Dutchman’s type” arose to refer to such thick and heavy horses. With registration numbers often dipping below 200 new registrants in the 1950s, American horsemen decided it was time to start refining the breed: With selective breeding, the American Belgian held on to its good qualities, including great dispositions, easy keeping and a willingness to work, and refined the over-heaviness and conformation. The “new” Belgian is still an excellent farm horse and can be found doing everything from plowing the field to pulling amazing amounts of weight in the heavyweight pulls, but is also refined and showy enough to be a star in the show ring as well:

In the country of Belgium, the thick-boned draft horse is called the Brabant, and is still bred for farm work. The Brabant horse is also gaining a fan base in the United States, with a Brabant Horse Club forming to continue breeding the original thick-set draft.

This popular breed of pony originated in the Shetland Isles of Scotland, which is a remarkably inhospitable place to be a pony. With long winters, stony ground and winds, the Shetland developed into a compact and stocky little pony, broad-backed, short- and stout-legged, thick-necked and hardy. Remarkably strong for its size, the Shetland was used extensively as a petite draft horse, pulling carts and working on the farm before eventually being trained in the mid-nineteenth century to work in the mines. Some ponies were imported into the United States for use in American mines, with the last pony mine closing in 1971. In the UK, the pony was later discovered as a children’s mount (as well as small adults) and can be found in the show ring and riding schools as well as a driving pony. The pony has maintained its stocky appearance:

While this traditional-style Shetland pony can still be found in the United States, different variations of the breed have developed as well. The American Shetland Pony Club recognizes three types of pony, with the Foundation type being the closest to the original stocky Scottish pony. This type of pony is shown in as close to a “natural state” as possible. The Classic American Shetland is a more refined version, tracing back to the first imported ponies of the 1800s when the breed was first selectively bred in the United States. “Classics” as they are called typically boast a strong topline, light but well-made bone and refined heads and necks.

The Modern American Shetland, however, is nearly another thing entirely. This variation has been crossed with American Welsh ponies as well as Hackney ponies to produce a high-action intense little pony that looks much more “horselike” than its Scottish predecessors. “Moderns” are shown with exaggerated gaits much like a Hackney:

The American Shetland as a breed both honors its past (and present) as the stocky little pony of the harsh Shetland Islands, and celebrates a new form as a fancy show animal.

What other breeds out there in the Horse Nation have similarly developed?