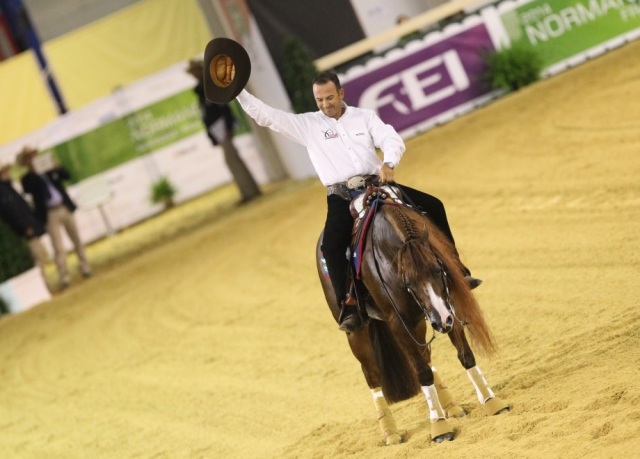 Don’t try this at a dressage show.

I unfortunately didn’t have tickets to the 2014 World Equestrian Games reining events, but every time I walked past the Zenith arena where they were being held I could almost tell what was going on just from the crowd noise. Reining fans are the real deal, a rambunctious throng of equestrian enthusiasts who loves horses and partying pretty much in equal parts.

Exhibit A: After the team reining event (won by Team USA) let out Jenni Autry and I found ourselves partying with a rowdy group of international reiners who kept buying us rounds because we were American. Um, OK!

Forget polite golf claps and restrained whoop-whoops. When it comes to cheering, reining fans don’t hold back. From cloud-of-dust sliding stops to dizzying spins to speed-demon figure-8s, reining fans are hungry for any excuse to lose their minds completely. While such unbridled ringside enthusiasm might not fly at other equestrian events, here it’s accepted and even encouraged.

The fans of the sport of reining are among the best and most educated in equestrian sport. Unlike many of the disciplines, reining encourages crowd interaction with a set of trademark whistles and noises of approval.  See something you like during a reining run? Let them know!

To the novice reining spectator, it might seem like a free-for-all of whistles, hollers and hoots. But is there actually a method to their madness?

Popular reining competitor, trainer and blogger Stacy Westfall recently took some video at a reining event and analyzed the crowd noise, from rowdy roars of approval to chicken dance intermissions.

She writes, “When reining horses are showing the crowd is often entertaining to listen to. Can you identify the maneuvers that are being done by the sound of the crowd cheering?”

REINING CHEER SQUAD CHALLENGE! Can you guess what’s going on at around minute 2:50 in this video with your eyes closed? If you can… you’ve either seen this performance before or you’re peaking through your fingers, because it is… well… just watch!