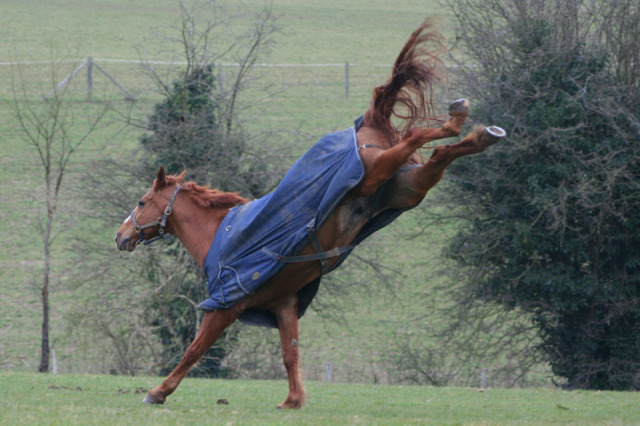 You know, in some circles you get paid if you can hang on for eight seconds. 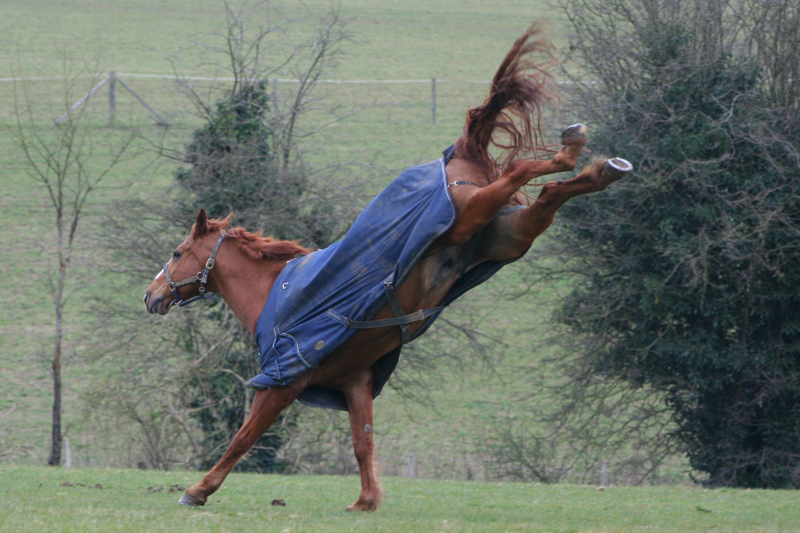 Most of the time, I’m sure, our horses are all perfect angels. But for those little moments in between, which of these categories does your horse fall into?

This is a chicken-and-the-egg kind of thing–do they buck because they have to fart, or do they fart because they have to buck? Either way, most equestrians are familiar with this one. Whether due to freshness, cool temperatures, excess flatulence, the wind, the moon, or other mystery factors, this is probably the most common kind of buck we deal with as riders. Also common during turnout, as demonstrated in this video. Turn up the volume for the full experience.

Occasionally partnered with the Fart-Buck, the Buck-Bolt typically includes one big ol’ kick/hop and then a rapid acceleration madly across the arena, pasture, trail or other riding space. The closely-related Bolt-Buck begins with the mad dash with one big buck in the middle. The experts differ on which is more difficult to sit, though most lean towards the Buck-Bolt.

Generally innocuous but still not much fun to ride, the Crow Hop comes in many variations: the Pogo Stick (straight legged and hopping up and down with no forward motion,) the Pony (various themes of “head down, man down” and both), the traditional Crow Hop and Crow Hop With Kicks. Identified by the rounding-up of the back and that queer and nauseating sensation of riding a bottle rocket that’s about to go off. Sometimes preceded with head shaking, and in the case of my own Red the cow pony, squealing madly.

This one’s a little tougher to stick. Whenever all four feet come off the air, a buck is considered a Bronco, colloquially shortened to “Bronc.” Individual variations include the Bronco with Spin, Bronco with Run, or Bronco in Place — all are characterized by complete leap off the ground. The Crow Hop can become the Bronco with a little more effort on the part of the horse. Hang on tight, cowboy.

Usually in response to a long spot, a deep spot, or any spot that didn’t suit the horse’s particular need at that time (like, you know, any of them) the Oh-My-God-I-Jumped-That can be either the horse’s version of flipping off the rider for putting him in a bad spot, or his own personal jubilation at actually clearing the jump from a bad spot. This buck has a very high success rate in unseating riders. Master this buck (we’ve got some advice for you here) and you’re on your way to becoming Beezie Madden.