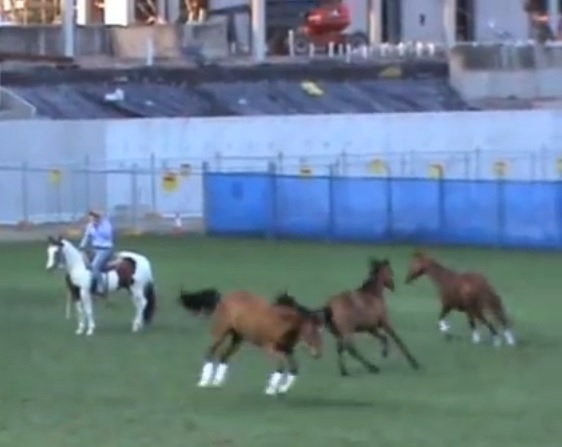 What happens when a freedom act turns into, well, a true freedom act?

At Equitana in 2011, Double Dan Horsemanship put on an exhibition demo that featured several horses in a freedom act. We’ve always found these acts to be quite inspiring and entertaining, and this one proved to be even more so!

A few of the horses in the act decided that today was just a day to play and break some rules. Fortunately, they were contained within an arena so there wasn’t too much damage to be done.

Cheerfully and quite calmly, the handler tried to get his horses back in some sort of orderly fashion, which a few obliged. One cheeky horse, however, decided that it was just his day to let his mane down and live like a wild horse.

Fortunately, no one, equine or human, was injured during this unscheduled diversion from regularly scheduled programming, but more than a few near misses were caught on camera.

Speaking of great saves, this called to mind the Budweiser Incident, as we like to call it. Lorraine Jackson reported on it earlier this year:

“At the Western Heritage Classic in Abilene, Texas last weekend, an eight-horse team of Budweiser Clydesdales was performing their iconic hitch maneuvering when an accident occurred.

“It appears from the footage taken from the grandstands that at around the 4-minute mark, one of the horses simply tripped, which caused a disastrous and very frightening-looking pileup of several of the 2,000-pound animals. (Warning, the fall is a bit alarming and hard to watch.)

“To the credit of the handlers, trainers, and hitch team that make these horses what they are, and to the credit of the horses themselves, not one of the team panicked, thrashed, or bolted throughout the unhitching and detangling process. Instead, the geldings calmly waited as the wagon team freed each horse one at a time from their 130-pound harnesses.

“The announcer kept the audience calm, and salvaged the exhibition’s conclusion by telling the crowd, “You have just witnessed a miracle.” It is incredible and fortunate that every horse walked out on his own four feet, though horsemen may be more inclined to chalk it up to years of high safety standards, superb training, and countless hours of preparation for just such a calamity by the Budweiser Clydesdale Team.

“A public relations representative for Budweiser provided an update that none of the horses was seriously injured, and all are expected to return to the hitch.”

If you missed it, check it out:

The moral of the story is: Horses will be horses, whether there’s nobody watching or an audience of thousands. But when things take a turn for the expected, it’s a cool head and excellent horsemanship that saves the day!