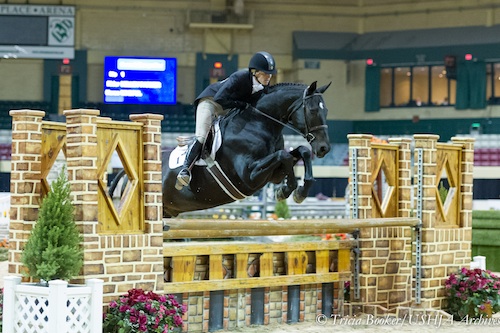 Watch this pair turn and burn their way around the handy round of the 2014 WCHR Pro Finals.

The World Champion Hunter Rider Pro Finals at the Capital Challenge Horse Show (Upper Marlboro, Maryland) is always fun to watch and the 2014 edition was no exception. The class pits the nation’s top professional hunter riders against one another via a three-round test, in which they switch on two donated horses for the first two rounds then bring a horse of their own for the third and final handy round.

Kelly Farmer was the only one of this year’s six competitors, which also included Hunt Tosh, Scott Stewart, John French, Sandy Ferrell and Tara Metzner, who hadn’t yet won the class in a previous year. She was in fourth place going into the handy round but a spectacular performance that earned scores of 92, 92 and 95 from the judges propelled her into the lead for the win.

The handy course, designed to test a horse’s rideability, included a trot fence, a hand-gallop fence and opportunities to show-off with inside turns and angled lines. Kelly’s mount, Mindful, was on his A-game and listening the entire way.

“Fortunately, since my horse is an ex-grand prix horse and so light on his feet and light to ride, he’s an amazing handy horse,” Farmer explained in a Jennifer Woods Media press release. “He’s used to doing that at four-foot, so at 3’6” he thought it was really simple. Whatever I ask him, he’s willing and tries hard. When I walked the course I knew I could go inside smoothly to the hand gallop, and he’ll pretty much follow you wherever you want. There’s nothing you can’t ask him to do.”

An interview with Jennifer after her win: