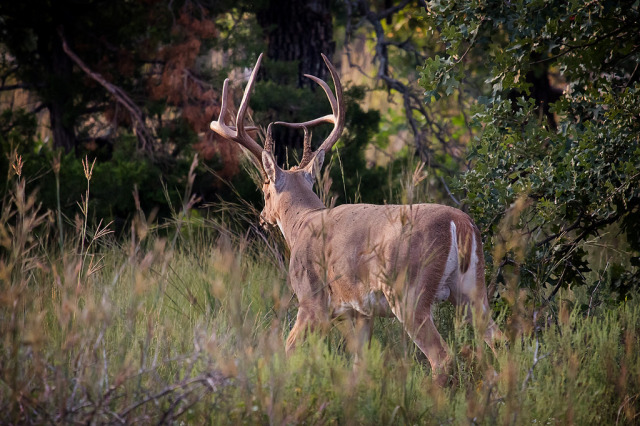 Hunting season is here–and we don’t mean the kind where you chase the fox. Here are some tips to keep you and your horse safe.

Beautiful autumn colors, crisp weather and the knowledge that the days are shortening are all excellent reasons to hit the trails. But game hunters of various kinds are taking to the woods this season as well, creating a perfect storm of conditions that can turn any pleasure ride into a total nightmare (bow season just opened in my home state, New York).

Does that mean you should keep the horse in the barn for the next few months? Absolutely not! But there are a few precautions you should take: Here are some tips and guidelines to keep you, your horse, and the other users of public spaces safe this hunting season.

Be a responsible trail user. Yes, public spaces are there for everyone to enjoy, but that doesn’t mean that you should go stomping off into the wilderness without making yourself aware of rules and restrictions during this season. Some states actually restrict the use of certain public lands for hikers, mountain bikers and horseback riders to certain days of the week during hunting seasons, starting as early as September through January. (Pennsylvania state game lands, for example, are public-use for the rest of the year but are restricted to Sundays only for hikers, mountain bikers and horseback riders through the end of hunting season.) It’s up to you to learn the regulations and restrictions of the public spaces you wish to enjoy before hitting the trail.

Ride only during daylight hours. Now is really not a good time to experiment with a night ride. Hunters are most likely to be in the woods at dawn and at dusk, so avoid the trails during those hours to reduce the risk of accidents.

Stick to the trail. Even if you know the area well where you’re riding, stick to designated trails during this season. Responsible hunters are positioning themselves well off the trail or at least facing away from it, expecting that any public trail users will be staying in those areas.

Be seen! Don’t sneak around like a deer in the woods–responsible hunters should know their shot before they take it but that doesn’t mean that accidents don’t still happen. Many tack stores are selling blaze orange gear for your horse as well as for you–don a reflective orange vest and add a bright orange halter under your horse’s bridle. You know the kind of orange I’m talking about–that bright, radioactive, burn-through-your-eyelids kind of orange:

Be heard, too. Lots of trail riders add bells to their tack in fall–just a little something to make it absolutely clear that they’re not a deer!

Ride with company. Deer are not typically found strolling down the trail having a conversation. Ride with a buddy if you’re able. Keeping up a conversation is another way to be heard without being too disruptive.

Leave the dog at home. If you normally trail ride with your dog, he’s got to stay at home during this season. Even a well-behaved dog who sticks close to you on the trail can be confused for a target if he’s glimpsed through the trees. Prevent accidents and heartbreak all together and leave your furry friend back at the barn.

Bring your phone. I feel like this is basic trail rider safety that most of us probably do anyway, but bring your phone on your person rather than in a saddlebag in case of emergency.

Ride ready. It’s hard to train your horse to get used to gun shots, but if you’re out in the woods during rifle season it’s bound to happen at some point. Be aware that if a hunter fires near you, you may have a major spook on your hands!

But what if you’ve been given permission to ride on private land? The landowner may still have given permission to others to hunt there, or may be hunting the land him- or herself. Use caution in this season, and it’s not a bad idea to contact the landowner to double-check. I know that many hunters are given permission by the owner of the farm whose horses I am riding, and even though I’ve been granted right-of-way anywhere on the property I’ll be donning orange and maybe adding a bell to my bridle when I go out this fall.

For the home farm:

Lots of horse farms butt up against public land, or perhaps private land where hunters have been granted permission. Again, responsible hunters know their shot before they take it, but you can prevent accidents happening out in the pasture too.

Turn out in groups. One lone horse could potentially be mistaken through the woods. Several horses grazing together make it much more obvious that they’re not, in fact, deer.

Add some blaze orange or other bright color. If you’re really worried, invest in some orange turnout sheets–but you could also add some bright orange vet wrap to halters or wrap a little bit around the base of the horse’s tail.

Double-check your property boundaries. Make sure your fencing is secure everywhere, and this is a good time of year to refresh any posted signage regarding property usage and ownership.

With a little precaution and planning, hunters and horseback riders can both enjoy the best of the season.