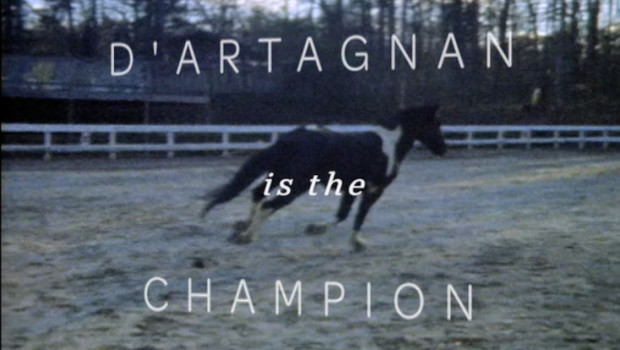 We talk to first-time director Missy Palmer, whose just-released independent docu-comedy “D’artagnan Is the Champion” traces the roots of an Atlanta rescue horse from his early days in the inner city to his current life as a semi-successful show horse.

When Missy Palmer, a horse lover from Atlanta and novice auteur, decided to direct and produce a feature comedy/documentary about a friend’s rescue horse, D’artagnan, she’s wasn’t quite sure what she was getting herself into — but she was up for an adventure

Which is exactly what she got.

The film’s premise: “Join bumbling first-time director Missy Palmer and friends Leah and Lynn as they trace the roots of an Atlanta rescue horse from his early days in the inner city to his current life as a semi-successful show horse. Meet all the characters they find along the way — downtown buggy drivers, homeopathic salesmen, black cowboys, prize-winning bull riders, Princess the pig and an Amish horse named Shorty Pimp.”

And a bonus animated trailer:

We caught up with Missy to ask her a few questions about the film:

You’re a filmmaker and an equestrian, so this film is perfect amalgamation of your passions. How long have you been into horses?

I’ve been into horses since I was about 11, when I had a summer lease on a sweet gray mare named Miss Muffet on her Tuffet. She was sold soon after the rental started and I had to settle for mean old Whistlin’ Dixie who enjoyed biting my butt whenever he felt the need for a treat.

My passion was quickly squelched by my parents who feared that I may kill myself and/or spend all of their money. But as you can see in the movie, at the age of 35 I started riding again and am now the happy owner of a lovely liver chestnut named Nutmeg.

I became interested in film in college and started working in movies as a camera assistant in Wilmington, North Carolina, shortly thereafter.

The central character in the film is a horse named D’artagnan. What is your relation to him? What about him captured your imagination?

D’artagnan was a new rescue horse that I met when I started taking lessons in my mid-30s at Ellenwood Equestrian, a barn just outside of Atlanta. He had a “macho” look about him and had to be housed in a special paddock far away from the other horses because he was too wild to hang out with them. When I learned that his former name was Daddy O’ and his father’s name was Shorty Pimp, I thought there could be an interesting story there.

Many horses have these secret past lives that we know very little about. Why did you feel like it was important to tell D’artagnan’s story?

He has a great “underdog” type of a story. I thought it might cheer people up.

Did you have any idea what you were getting into when you started digging into his past, or was everything a surprise?

My friends, Lynn and Leah, the owners of D’artagnan, had helped to rescue him, so we knew a little bit — like the fact that he had been raised by urban cowboys. But we definitely did not know that his dad hailed from Amish Country and his mom may have been named after Cybill Shepherd’s character in the TV show Moonlighting.

Tracking down a horse’s backstory is harder than you’d think. What obstacles did you run into and how did you overcome them?

The film is a comedy, it’s definitely about D’artagnan, but also about the art of movie making, which the character I play in the film is not very good at. So basically, all of the obstacles that we ran into — such as D’artagnan constantly trying to bite the camera (and me) are shown in the film.

I imagine that learning D’artagnan’s story gave you and his owner a deeper understanding of his personality, his behaviors, his quirks. Did anything start making sense that hadn’t really made sense before?

Not really, because, as you’ll see in the movie, we gather lots of conflicting information and never really learn the truth.  It was, however, a relief to find that his previous life had been fairly good, though he did spend one week with very little food when his owner fell on hard times.

How can people check out the film?

They can go to Vimeo and watch the trailer or movie here. It’s quite inexpensive, $2 to buy and $1 to rent. But if they happen to be feeling extremely poor, they can just type in the extra special secret password, which is “hamburger” and watch it for free. The DVD itself is also available on dartagnanmovie.com if they would prefer to purchase it that way. And theater screenings can also be found on our website or Facebook page.

Anything else you think readers would be interested to know?

I guess I just want everyone to know that the movie is about a rescue horse, but in a way it’s not. It’s more about life with a little bit of silliness thrown in.

Many thanks to Missy for taking the time to chat with us. Go Riding!