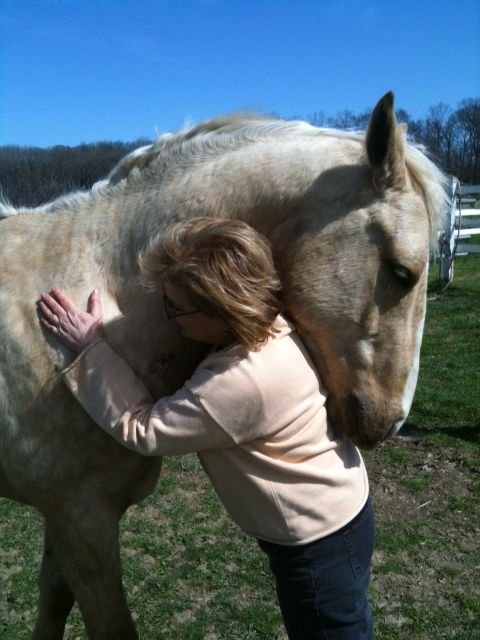 Ruthann Perry bought Oliver on impulse after watching a horse trader try to beat him over a jump — and she’s never looked back.

Oliver was always destined to be something special. When I first met him, he and his almost identical two brothers were part of a small herd being kept at the barn where I rode. There were, in the herd, three golden palomino brothers, huge and beautiful. The horse trader would trailer whatever horses he had to different auctions. He bought and sold, always trying to make money by “retraining” horses for pricier fields — from farms to hunter-jumpers or dressage owners.

One day as I was leaving the barn, I witnessed Ollie being beaten with a whip by the trader. Oliver was calmly standing in front of a jump, refusing to go over. I got into my car and sat and cried. That night I called the barn manager and told her I wanted to buy Ollie. I’d been looking for a while and I’d seen Ollie’s two brothers disappear on the trailer, assuming they been sold.

Ollie had been the youngest of the three brothers and was probably two or three. His white fuzzy muzzle was sunburned and peeling as the trader’s horses lived outside 24/7. This was a brutally hot August.

He looked like a cross between a quarter horse and a standardbred, with a lovely almost-white mane and huge hindquarters. He was 16 hands. Considering his crazy life so far (and the fact that he was intact) he was a remarkably sweet and friendly boy. The barn manager said she would talk to the trader and get a price.

I waited two days. I got a call about the price (cash only), ran to the bank and withdrew my money. Arriving at the barn I handed it over and was given Ollie and a halter, nothing else. Promises of his “papers” from the last owner, in Canada, were given and to this day I’m still waiting.

Also, he’d just been gelded the day before. God knows how the trader did it — I shudder to think, and I’m sure it was not how a vet would do it… but I accepted Ollie as a brand new gelding. Again, he never showed any bad behavior as a result of what the trader did to him.

But this day, he was mine.

I had been wanting a horse. I didn’t have much money or experience, just five years of lessons under my belt and a strong desire to ride something other than lesson horses. I placed an ad on Craigslist looking for someone to go in with  me, to split the costs and double the love and attention the horse would get. I could tell a lot of people thought this was crazy (there were times that so did I) but it worked. I found a wonderful person who knew way more than I did about horses (bonus!), who liked the idea of splitting costs and was connected to someone I worked with!

It’s been three years and the thing about it is (and I wish the trader could hear this) – Ollie loves to jump. We’ve taken a slow approach, laying poles on the ground for the first year and a half, letting him sniff them, look at them and step over them slowly. Janet always gives him words for whatever she is asking him to do or see: “over,” “gate,” “scary rock,” talking him gently through everything.

Mostly we smother him with praise and love. Often friends will come watch him in the ring, sitting on the fence and cheering him on. Jumping a pole or cavaletti he gets choruses of “Yay, Ollie!” and plenty of “Good boy”s from the rider. He eats it up.

Now he is comically eager at the jumps in the big ring. Our new barn is run by a hunter-jumper and there are jumps everywhere of all sorts on this beautiful farm. If you ask him if he’s a good boy, he’ll shake his head vigorously yes! Then look for the treat for being so smart.

About Ruthann: I am a sculptor (mainly horses) and Art Educator. I’ve been riding for 10 years and have been a horse owner for four, and only started riding when I was 50 years old.