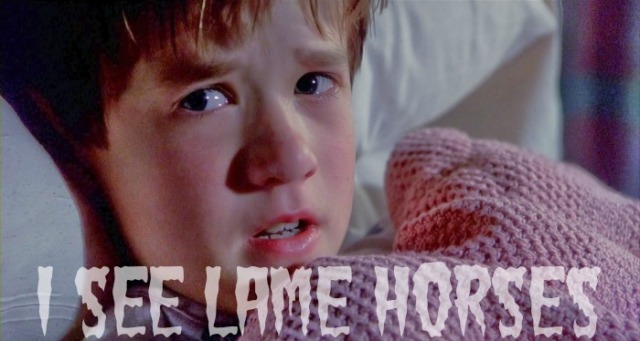 If a horse looks a little “off,” can you pinpoint what’s going on and where? A new video series by Equine Guelph shows us how, then puts us to the test.

Some horsepeople just have a gift for seeing lameness. Like Tally, the commander-in-chief at the barn where I board my horse — she seriously missed her calling as a performance horse vet. She can watch a horse jog, like, five steps up the barn aisle and tell you exactly where the lameness is and what might be going on. It actually freaks me out a little. Like the kid in The Sixth Sense who sees dead people everywhere he goes, she sees lame horses everywhere she goes. She says she’s only seen, like, a handful of 100% sound horses in her life. Not because they’re all limping around, but because she’s so baller at identifying those tiny little hitches in a horse’s giddy-up that most of us don’t even notice — until they develop into something more serious.

Not everybody was blessed with such vision. I can watch a horse go around and around on a lunge line for five minutes in complete puzzlement, knowing the horse looks a little uneven but unable to put my finger on where the issue is. I don’t want to bug Tally for the umpteenth time this month so I take the horse to the vet, who charges me one million dollars to diagnose him with a stone bruise or whatever. Wouldn’t it be so much easier, and cheaper, if I could just pinpoint the lameness myself?

Equine Guelph to the rescue! The horse owner’s center at the University of Guelph just released a nifty series of videos designed to train your lameness-spotting eye.

In the first video, veterinarian Nicola Cribb talks about how to tell if your horse is lame and shares some guidelines for helping you determine whether it’s a front or hind leg lameness.

Ready to test your new lameness-detection skillz? Watch the video. Determine your answer. Then keep watching to see what the vet has to say.

Did you get it? If yes, congrats! You’re on your way to putting your vet out of business. (Just kidding. Vets will stay in business for as long as horses keep inventing new ways to injure themselves, so basically forever.)

Couldn’t quite see it? Here are a few more videos to test yourself against.

Many thanks to Equine Guelph for putting together such a great series and to Dressage Hub for sharing — we highly recommend subscribing to their YouTube channel, which is loaded with fun and educational resources for dressage enthusiasts in particular and horse owners in general. You can also follow them on Facebook here.