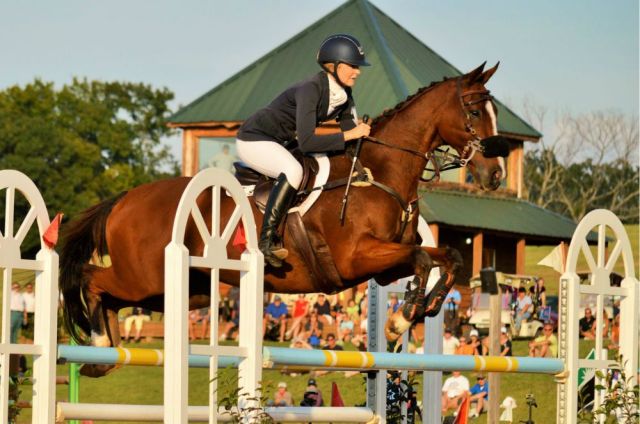 When her horse’s hackamore fell off mid-course at the American Eventing Championships last weekend, Avery knew what she had to do. From Eventing Nation….

Avery Klunick and It It to Win It. Photo by Sally Spickard.

From Sally Spickard via Eventing Nation:

Avery Klunick and In It to Win It enjoyed a smooth round around Richard Jeffery’s show jumping course in the Adequan USEA Gold Cup final yesterday – until fence 9, that is. Approaching a black and white vertical, In It to Win It slammed on the brakes, the momentum causing Avery to go up the neck a bit, taking the bridle off in the process.

With the bridle off, In It to Win It took a few trot steps towards the in gate but stayed calm and stopped when Avery asked. Since both dismounting and asking for or accepting assistance would have resulted in elimination, Avery only had one choice if she were to continue on her way: find a way to get the bridle back in its place.

“It was really surprising that he stopped, he was jumping so well up to that point,” Avery said. “I just didn’t close my leg enough and he stopped pretty hard and I literally thought I was falling off.

“He was a really good boy and he just let me push myself back on. And then I wasn’t sure what to do, I looked at the people by the arena and asked if anyone could help and they said they couldn’t if I wanted to continue. And Tamie (Smith) said ‘Put it on!’ so I just reached down and grabbed the bridle. I felt like it was taking forever, and I was thinking ‘why are they letting me just run around the arena?’ I was waiting for them to buzz me out!“

Clear on the second attempt! Photo by Sally Spickard.

Avery calmly reached forward and slipped the bridle back on her horse’s head. Luckily, she was riding in a hackamore, which likely made it much easier to put back on. Avery got the main parts of the bridle back on, but the throatlatch remained over her horse’s forehead. “Everyone was asking why I had my throatlatch that way, but I just couldn’t get it back underneath!,” Avery said.  Either way, Avery magically got situated and continued on her way.

“I was just crawling on him and hanging on him like a spider, and he was such a saint,” Avery said. “I’m really lucky that he didn’t run off or jump out because it easily could have been really bad and one or both of us could have gotten hurt.”

The crowd roared its delight, and the pair went on to finish their round with a big smile (and perhaps a slight smirk from In It to Win It). Avery is heading to Fair Hill next, and in her racing mind after “Winston” stopped, she thought that she really needed to finish on a good note so that they were ready for Fair Hill.

“I was literally thinking a million things at the time, which felt like 10 minutes passing, and I just really wanted to finish. I really thought they were just laughing at me up in the announcer booth so they weren’t going to buzz me out!”

I asked Avery last night if she planned to purchase the video so we could all relive the epic save, and she answered with a definitive ‘yes!’. This came as a relief, as Maggie and I were talking about starting a Kickstarter to purchase it if Avery wasn’t going to. Thanks for saving us the work, Avery!

Check out Avery’s epic save in the video below, thanks to RNS Video. What’s your most epic save moment?