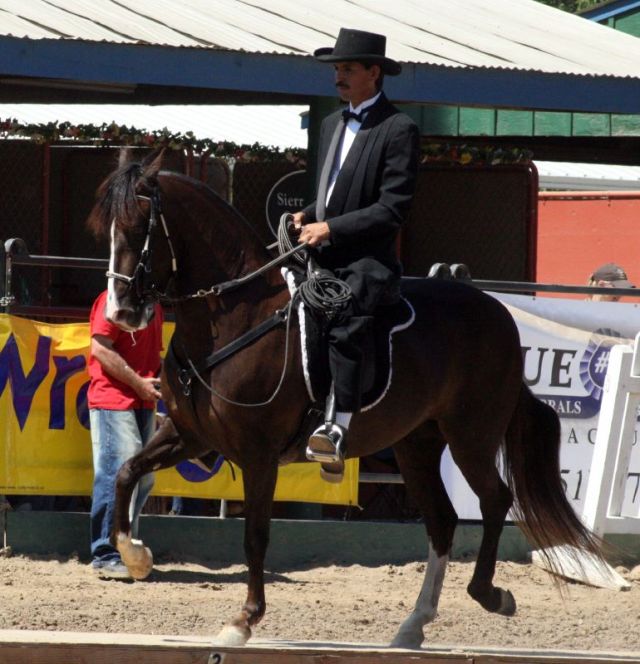 I legitimately have no idea how it’s possible for these horses to do what they’re doing.

The USEF Network is amazing. I remember a slow day in the office last spring in which my coworker and I essentially watched about eight hours of the Devon Classic before we realized how much time had gone by (whoops). I’m sure there are lots of equestrians all across the country glued to their screens right now watching the Capital Challenge, and we have the USEF Network to thank for this grand unification. But if you’re in the mood for something a little different, the network is also live-streaming another big show for your viewing pleasure: the Paso Fino Grand National Championship, being held Sept. 29 through Oct. 4, 2014, at the Kentucky Horse Park.

I watched a few classes yesterday, torn between silent struggle to comprehend how the horses were moving like that and squealing to my long-suffering fiancé to come over here and watch this for a minute. I know very little about gaited horses, and next to nothing about Paso Finos — a farm in our equestrian neighborhood where I grew up raised the breed and I remember taking a 4H tour of the place, watching the proprietors ride their horses over a long lane of wooden planks in their indoor. Hey, that was one thing I recognized, at least — the Trocha class I watched included the bit with the boards, the horses’ dainty-looking little feet thundering away the entire length of the arena. Their feet! They moved so fast, and yet no one was going anywhere! Salsa music was playing in the background and everyone was wearing a cool hat. This show looked like fun!

Funny story…the horse’s feet are actually moving too fast for the gif to keep up with — hence, hover-horse. I kid you not.

I did some actual research to figure out what it was I was looking at. The American Paso Fino’s history begins with the arrival of the conquistadors into Latin America and the Caribbean. Paso fino translates to “fine walk” and these horses, descended from Spanish barbs and Andalusians, were known for their smooth gaits and endurance. The breed went largely undiscovered after the decline of Spanish colonialism until the 1940s, when Americans stationed in Puerto Rico came into contact with the horses and began importing them into the United States. Twenty years later, a different strain of Paso Fino began to be imported from Colombia. While some breed purists prefer to keep the two strains separate, most breeders combine bloodlines between Puerto Rico and Colombia for the American registry.

The Paso Fino is shown in three divisions: pleasure, performance and classic fino. In both pleasure and performance, the horses are shown in three gaits: the flat walk, the paso corto and the paso largo, with the difference being the way of going in these gaits. The pleasure horse should not be overly collected and should perform these gaits in a relaxed fashion, while the performance horse should be collected and show great expression. The classic fino division shows only at the classic fino. The sounding board which is the sole memento from my forgotten Paso Fino farm visit as a youth is used in many of these classes by the judges to analyze the cadence of the gait –kind of like tap dancing for horses.

The confusing part for the uninitiated, such as myself, is trying to figure out the visual difference between the paso corto, paso largo, and classic fino — all three gaits are defined as “evenly-spaced four-beat lateral gait.” The differences are in the amount of forward motion, best illustrated by this retro-style video from the Paso Fino Horse Association:

Horses are also shown in-hand in conformation classes, called “bella forma.” The Paso Fino is not a large breed, with average height usually around 14 hands, but is sturdily-built while refined, able to carry a large man with ease while performing its unique gait. Riders and handlers are expected to dress according to their tack, meaning either in a western or “plantation” style, with bling decidedly out of fashion. I noted some extraordinary chaps in the show ring that appear to be unique to this breed.

Also on tap for this week’s Paso Fino Grand National Championship are costume classes, driving, games, western pleasure, trail, equitation and youth classes, and most interestingly, a paso largo race on Thursday evening that I know I will personally be watching. The entire show can be viewed either live or replayed for free on the USEF Network.