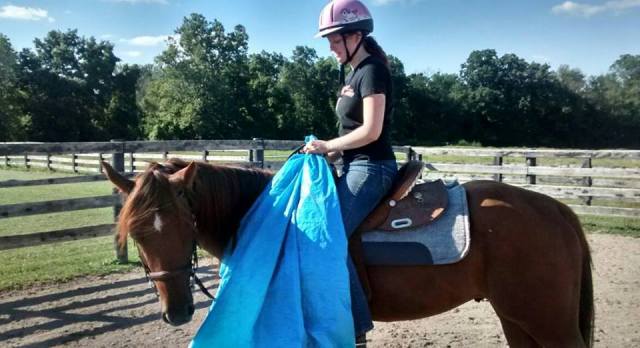 I think that one of the reasons I have always loved horses is because I can relate to them so well. They’re flighty, over-reactive and always alert. As someone with an anxiety disorder, I can understand the urge to run first and ask questions later.

Reconciling the anxiety and fear I feel with the desire to ride a 1,000-pound animal that could easily kill me hasn’t been easy, but I have learned some important things about myself as well as horses that have helped me make it through.

1. Confidence does not always relate to ability.

When I first started riding I assumed that confidence was something that all of the great and experienced riders had. After all, most people are more confident the 100th time they get on a horse than the first. The more that I rode, however, the more I found that my confidence level was on less of an upward slant and more of an unpredictable roller coaster.

For two years after a particularly bad fall I would have a panic attack nearly every time I got on a horse. I thought I was a terrible rider, but looking back, I wasn’t. I knew what I was supposed to do, and once I got over my fear I could do it well. Sometimes confidence is about skill, but other times it’s just about personality or circumstances.

2. Growth happens after you’re comfortable, but before you’re terrified.

A large portion of my riding career has consisted of trying to figure out just how hard to push myself. I know that if I never go out of my comfort zone I will never advance, but I also know that if I continue to push myself when I am terrified it can turn into a disaster.

I had one experience where I was trying to school a horse over a course, but I was afraid of the horse and didn’t trust him due to the fact that he was very strong and forward. He sensed that I really didn’t want to be jumping him and refused every fence at least once. The next day a rider who was more confident and comfortable with him got on and schooled the same course and he didn’t refuse a single fence. In one way that was a blow to my self-esteem, but in another way it was a learning experience. If I had pushed myself a little bit at a time with that horse we may have been able to work up to that course, but instead I tried to force myself to do too much too quickly. It is important to know your limits and to know when it’s right to push them, and when it’s best to try again another day.

3. Changing your situation is not the same thing as giving up.

There were times that I thought I was giving up on horseback riding. It wasn’t because I didn’t love the sport and the animals, but because, after discouraging ride after discouraging ride, I was certain that I was not good enough to continue. One low point came after I bought my first horse. She was a beautiful, talented mare who would eagerly jump anything you put in front of her. She was also very high energy and had a busy mind, but I had been riding for 15 years so I assumed I would be able to handle it.

After a few rides with her, however, I began to dread going to the barn. Every ride she would begin to grow nervous and I would become afraid that she would spook. She would sense this fear, think something was wrong, and spook or bolt, and then I became even more anxious, and she would become even more worked up. It was a disaster, and soon I was too afraid to even ride that talented jumper over a ground pole. Thankfully she found a great new home with a more confident rider who had known her before I bought her, and the next horse I bought was quiet, and had a calming influence on me instead of feeding off of my anxiety. Different horses do well with different types of riders, and vice-versa. Giving up on one situation does not mean that you have to give up on horseback riding entirely.

4. There is a place for everyone in the horse world.

This is the most important thing that I have learned, and also what took me the longest to realize. There were a few times when I thought that nervous people like me did not belong around horses. After all, what business did I, a 100-something pound person living with a constant low level of fear and jumping at the slightest movement, have riding on the back of a 1,000-something pound prey animal that survives by overreacting to cues in its environment (including cues from its rider) to keep itself alive?It was a recipe for disaster.

After changing my equestrian environment as well as learning new skills through therapy to help me cope with my anxiety, however, I can confidently say that I have found my place in the horse world. I have an amazing gelding that I love, a barn and instructors that make me feel safe, and I’m surrounded by a kind and supportive group of horse-friends. When things do go badly I can remember how I have overcome issues in the past, and it is easier to believe that I will do it again. Spooks or bad rides seem less terrifying when I trust my horse and my environment, and therefore become easier to recover from.

I am truly happy with my barn life and I have realized that it is possible to be a capable and happy rider despite having an anxiety disorder.

Victoria is a Horse Nation reader and a horseback rider from Ohio. She currently rides all-around with her five year old Quarter Horse gelding, Houdini.