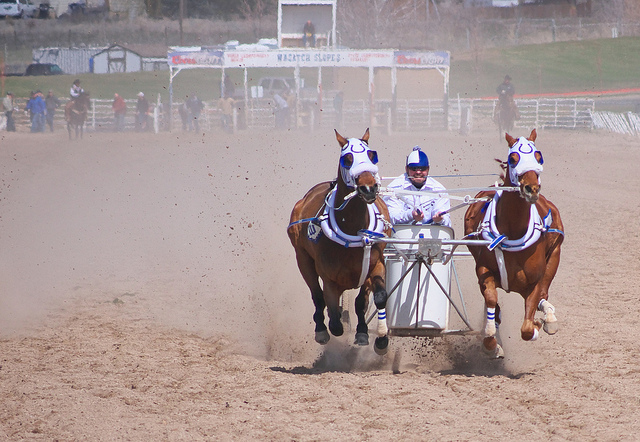 Said to be the oldest form of equestrian competition and the trigger for the original Olympic games, chariot racing has found a new thriving home in the American West…with a few cowboy modifications, of course.

Chariot racing was brought to the silver screen and general popularity by Ben-Hur, but it’s been around for thousands of years. The races are first recorded as a competition in the Olympic Games of 680 BC but were referenced earlier in literature by Homer, as well as represented on pottery.

Chariot racing depicted on pottery dated between 500 and 480 BC. Photo via Wikimedia Commons.

The original chariot races were dangerous both to teams and driver, with teams consisting of four horses abreast drawing a tiny war chariot — standing room only for the driver. Races took place on an oval track meaning that seven or eight teams were all jockeying for position along the rail. The sport’s popularity eventually transcended the race and took on political and societal implications, first among the Greeks, then the Romans. (The Romans, madly, drove their chariots by wrapping the lines around their waists. Because, you know, safety.) Chariot racing eventually fell out of popularity around the seventh century, though races were still held on a very small scale.

Painting of chariot racing in a Roman circus by Albert Kuhn (1913). Photo via Wikimedia Commons.

And then in that funny way that equestrianism has of passing through time and across the world, chariot racing became a new popular sport, in of all places, the Rocky Mountains.

When chariot racing and Facebook collide… if only the ancient Romans could see this!

Originally, like many such cowboy sports, the races were just a contest between farmers and ranchers hauling their goods to town and racing their teams of workhorses in the 1920s. Then they started hitching their lighter, faster saddle horses, then stripping down their milk wagons, and so on — until these western adventurers had rebuilt the ancient war chariot, swift and light, but this time drawn just by a pair of horses. The original American chariot races are credited to the town of Thayne, Wyoming.

Chariot racing now has its own league in Wyoming, Utah and Idaho, with teams gathering in tournament-style weekends of racing all across those three states. Rather than whipping chariots around a circular or ovular track, teams compete over a straight quarter-mile sprint in a head-to-head format, which reduces some of the risk of rolling a chariot in a turn or clipping heels with another team. Horses are typically stock breed sprinters, though I’ve met teamsters in Wyoming who are using their regular working ranch horses on the weekends for the local race.

In Dubois, Wyoming, the chariot races are held on a flat hilltop above the town, where a flat-ish section of track is maintained for racing purposes. There’s even a starting gate constructed. Cowboy outriders wait at the end of the quarter-mile to gallop alongside the sprinting race teams, helping the drivers get the horses under control. The snowy Absaroka Mountains tower over the entire scene, lending a strange feel of disorientation — you’re watching this most ancient of equestrian contests while sitting on the hood of a truck with a cowboy hat held down tight in the mountain wind. The starting gates crash open wide and the chariots take off, drivers calling to their teams as the tiny aluminum chariots bounce and rattle along behind, the horses sprinting all-out the length of the track. It’s a spectacle not to be missed.

Here’s a video collection of the Dubois races: