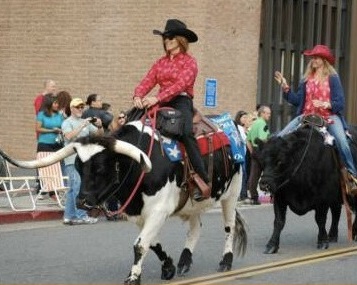 From parades to trail-riding and even team sorting, Dozer and Jazz do it all.

Kimberly Henson, of Newcastle, California, never had an interest in horseback riding. She had ridden a handful of times, sure, but she simply never got the “horse bug.” She did, however, always love cattle…and when she moved to a rural community in the economic downturn of 2005, she got the opportunity to own one–two, actually, when the cow had her calf. Being of a practical mind, Kimberly realized that everything on the farm had to earn its keep somehow–and rather than eventually eat the little steer, a hornless Irish Dexter, she decided to try something a little bit different.

With the help of a horse trainer friend and some natural horsemanship methods, Kimberly broke the steer, named Dozer, to lead, drive, do basic tricks and to saddle. And one saddle steer wasn’t enough–soon Kimberly found herself bringing home Cowboy Jazz, registered Texas Longhorn “Premier Longhorns All That Jazz” to join the farm. Jazzy was bred to be a pet and riding steer–he was imprinted at birth at Premier Longhorns, the best ranch in the country for producing riding cattle.

Kimberly learned her horsemanship–or would that be steersmanship?–on the backs of her cattle. “They’re a lot more ‘whoa’ than ‘go,'” she states. Friends who have ridden gaited horses tell her that the steers feel very similar, smooth but ground-covering. They fit into saddles with extra-wide trees; Kimberly rides in both western and dressage saddles with draft-sized girths. One major difference in tack is the nose bit: rather than a bit in the mouth like a horse bridle, saddle steers are guided by a metal bar that’s pierced through their nostrils (similar to a nose ring for driving oxen.)

The Moo Boyz on the Block, as Kimberly calls her herd of two, make appearances at birthday parties, visit senior centers, go to schools and community centers and of course are ridden and driven in parades. (Kimberly in particular loves the local holiday parade, where she gets to decorate Jazz’s impressively wide horns with Christmas lights.) Senior citizens in particular really respond to the cattle–many owned cattle at some point in their lives and being close to such gentle representatives of the breed speaks to them.

When not making public appearances, Kimberly enjoys trail riding her steers. Cattle don’t generally spook like horses–though they get scared, they tend to hold their ground and wait. On public trails, Kimberly always tries to be obliging to equestrian traffic: horses always get the right-of-way around her steers, and she cooperates with horse owners to give them room, slide off the trail if necessary or ride around. The only real friction Kimberly’s ever experienced with a horse owner was attempting to share a public riding ring with a dressage queen, who did not appreciate “that thing” (her words, not Kimberly’s!) that Kimberly was riding. Most other horse owners are genuinely interested and friendly, and horses usually take a good hard look and then move on. Kimberly’s even used her boys at other farms to help horse owners desensitize their horses to cattle.

Kimberly’s latest interest is team sorting with Jazzy. At first, the sorting cattle did not respect Kimberly on her own steer at all–but once all parties got the hang of it, everyone started having fun, especially Cowboy Jazz:

Go riding…whether you ride a horse, pony, or longhorn steer.