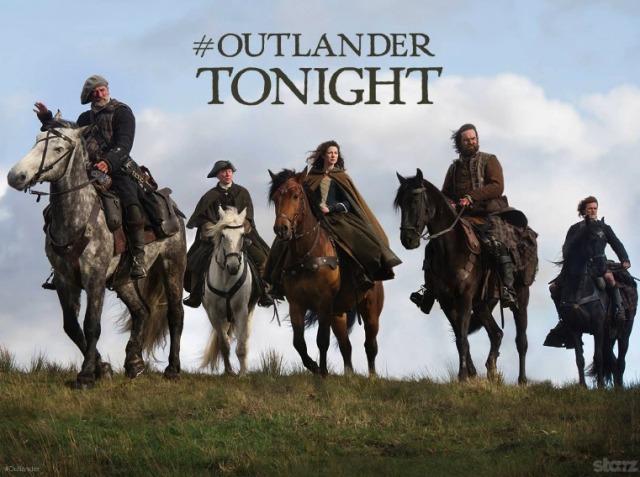 Outlander will wrap up a record-breaking run on Starz this Saturday with its mid-season finale. The reviews, both critical and fan-based, have been off the charts and I’m here to add to the applause, because the horsey elements are fantastic.

This all started about a million years ago (2013 to be exact) when Sam Heughan, the actor cast as lead hunk Jamie Fraser, posted this on his Twitter.

I freaked out, y’all. First, it’s Jamie Fraser. Second, the actor playing this literary demi-god is quite easy on the eyes. Third, the first picture from set and he’s by a horse?!? Umm, yes, please, and thank you! #feels

So, from the get go it seemed the Outlander cast and crew were taking their horses seriously. Both Heughan and Balfe began taking riding lessons months before production started. That fact gave me so much peace of mind. I mean, is there anything worse than seeing a great actor in a great role flopping around in the saddle? The answer is no, there is not.

Then the production stills started rolling in.

I fell in absolutely love with this grey. #horsecrush

Forget replica wedding rings and such, when will the Outlander store offer replicas of this bridle? #needtoknow

I can honestly say that each and every actor looks comfortable on and around horses during the show. There is even one lovely scene where the characters — after returning home from a long ride — discuss hoof care. The scene was criticized as a time waster in other TV reviews, but I found it refreshing. How many times have we seen a horse galloping into a castle courtyard, the rider pops off and the horse just disappears off screen? Where do they go? Why don’t the riders care for them? And, lemme be honest, if you’ve been galloping for 10+ miles you cannot hit the ground running… ammarite?

All in all, the actors also seem to truly enjoy horse riding.  Here Hueghan talks about riding in a kilt –

I feel a challenge brewing!

Check out the first half of Outlander season 1 today!  The second half premieres April 2015. New episodes air on Saturdays at 9p.m. ET/PT.