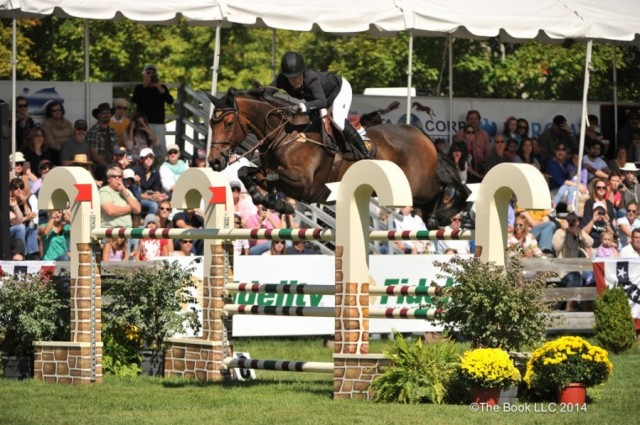 Her mount was Vindicat W, who gold with British rider Peter Charles at the 2012 Olympics.

More from the 2014 American Gold Cup is available on-demand on USEF Network on the USEF Network.

Springsteen and Vindicat W bested a field of 32 other qualified international entries to add their names to the list of accomplished riders and horses who have won the $200,000 American Gold Cup CSI4*-W before them.  Springsteen’s parents Bruce Springsteen and Patti Scialfa and family friend, NBC Nightly News Anchor Brian Williams, were all on hand to cheer her on.

This year, as Springsteen stood atop the podium, her trainer, Olympian Laura Kraut, stood to her left and fellow young rider, Katie Dinan, joined her to her right. The three American women had swept the medal positions in an exciting and fitting end to the 2014 American Gold Cup.

“It’s absolutely incredible,” Springsteen said. “To win such a prestigious class is really amazing. My horse jumped super so I’m so thrilled.”

Springsteen was fourth to jump over the first round of the Alan Wade designed course, and she set the pace for how her day would go, turning in a clear round that would lead the class from beginning to end.

“The fences, especially at the end, were pretty big,” Springsteen said. “It was definitely tough enough, but after walking the course I knew exactly what my plan was going to be. That was kind of a relief since I went so early; I was just able to go in and execute the plan and hope for the best.”

As the first to go clear in the first round, Springsteen was also the first to return to jump-off, and she and Vindicat W laid down a speedy time to beat in 35.360 seconds.

One rail each fell for Candice King and Wilton Porter, relegating them to fifth and sixth place respectively, and for Minikus and Babalou 41 a clear round in a time of 37.920 seconds would put them into the eventual fourth place position.

With Springsteen’s time still the pace to catch, it all came down to Dinan and Kraut.

Dinan and her veteran mount Nougat Du Vallet, owned by Grant Road Partners LLC of New York, New York, turned in an impressive ride over the seven-obstacle jump-off course, but their time of 37.920 seconds would come up short of the top spot.

So it was left to a race between trainer and student, as Kraut entered the ring to try to best Springsteen’s time on Andretti S, a 9-year-old Dutch Warmblood owned by Stars and Stripes of Middleburg, Virginia.

Kraut left out a risky stride into the double combination and sailed over the course with room to spare, but she elected to add a stride to the final fence, which would just narrowly cost her the class as she finished in a time of 36.660 seconds.

“I knew when I cleared the second to last fence and I turned him, I had a choice to just go really flat out down to it, but he’s still a young horse,” Kraut said. “I thought rather than taking the chance of crashing or doing something that would scare him, I’d just sort of stay conservative. Yeah, it cost me, but I’m happy with second.”

Kraut has every reason to be thrilled with the outcome today. At the beginning of the year, she was competing the young Andretti S in the 1.40m jumpers, but today the up-and-comer stepped up to the plate and answered every question that was asked of him at 1.60m.

“I’m just so happy with him,” Kraut said. “Just all of a sudden it’s really started to come to him. It was a difficult test for him today, and he handled it great.”

Kraut continued, “And I’m so thrilled for [Jessica]! She’s been so close so many times. She’s been amazing all summer. She deserved it today. She rode great. Her first round was textbook perfect and so was her jump-off. I said to her: “If you lose, if you get beaten it would be unlucky.” She really did everything just right. I didn’t even think I could get that close to her, so I’m pleased that I was as close as I was.”

Springsteen has been riding and training with Kraut for over three years and was thrilled to have the opportunity to stand atop the podium with her today.

“She’s just taught me so much at this level like how to be competitive in big classes like this,” Springsteen said. “She taught me how to really fight for it and fight for the win.”

Kraut added, “She’s such an incredible rider, and she has such a great feeling. When she makes a mistake it’s normally so small and so random. [She and Vindicat  W] know each other inside and out right now. They’ve been on such a good roll this whole summer and winter. I just leave it to her.”

Next, Springsteen and Kraut will travel to the Longines Los Angeles Masters with hopes of matching their huge success at American Gold Cup.