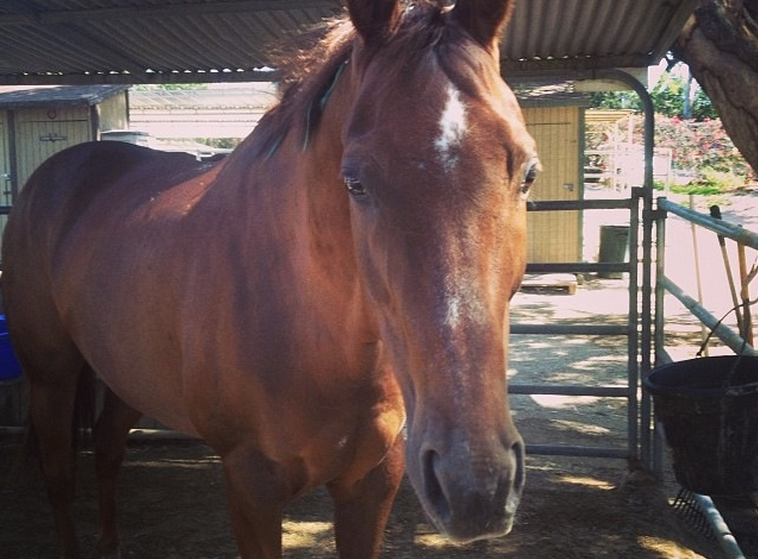 Lauren Theroux shares the story of a Dunkin Donuts, a starving auction rescue who found a forever home in her heart.

He’s not a show champion or anything that spectacular to the naked eye, but to me he is the world.”

Dunkin came into my life on November 11, 2012 via Auction Horses Rescue and Mike’s Auction House in Mira Loma, California. He’d been turned away from the auction for obvious reasons and was forced to spend the night in the man’s trailer who brought him in. The next morning as I was picking up a foster horse for Auction Horses Rescue, I was approached by the man to take him.

I couldn’t even look at the horse. Megan, the founder of Auction Horses Rescue, did a once-over and just looked at me with defeat in her eyes. She’d rescued nine horses at that auction and was tapped, and she had nowhere to send him. Without even looking at him I handed her my fleece-lined shipping halter that belonged to my 1.30 meter show-jumper and said, “If he’ll load up I’ll take him.”

The auction guys laughed at me, but of course he jumped right in. Pulling out of the loading dock they informed me my trailer tire was flat and completely off the bead. AAA won’t fix a flat unless you unload the horses. A nice man from a tow company had a compress so we gave it a shot. I wrapped myself around the tire to hold the bead in as he manned the compressor, and miraculously it beaded. He told me to get going and not to stop until I got home and that he was praying for us.

Getting him home was less eventful. I slept in his stall for two weeks, worried that he’d lay down and not get up. We slept in his stall together with about 30 bags of shavings to keep his bones off the floor. He was a body score of a “1” and was missing his top teeth, covered in fungus and scratches, and wormy.

Within a month he put on 50 pounds, his fungus cleared up, his feet looked decent after a few trims, the vet said his legs were clean, and his blood came back normal. He was just starved. The man we got him from said the horse got dumped on him by boarders. He lived in Compton and had a lot of abandoned horses, which he kept them all together. We think he was chased off what little feed there was.

Like I said, he’s not a show-jumping champion but he’s my pet champion. He got his name because we kept thinking he could really use some donuts. He’s a dog lover. He’ll groom the dogs and lick them all over. He loves to follow dirt bikes, the quicker the better — it’s his favorite pastime. He comes running as soon as one fires up (my boyfriend is a motorcycle mechanic). He’ll pony-ride any kid and patiently deal with all adults. He’ll steal your beer if you’re not paying attention and he’ll let you come take a nap with him. He’s well-broke: Walk, trot, jog, canter, lope… whatever you ask he’ll do. He jumps, crosses bridges and will patiently stand while his trail mate has a complete fit over a plastic bag.

I’d like to spread the message that you don’t have to buy the $20,000 warmblood to have a great horse. Don’t shop, adopt!

Note: Lauren wishes to thank Auction Horses Rescue for their help and mentoring. The Los Angeles-based rescue is a 501c3 dedicated to networking, rescuing and rehabilitating the many horses that pass through California auctions and maintain a record of those left behind. “They do such incredible work,” Lauren says. Learn more by visiting their website here and liking their Facebook page here.