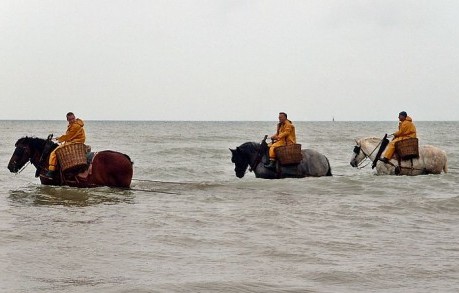 Combining the power of draft horses with the shrimp fishing industry, this tradition still lives strong in just one Belgian coastal village.

Plodding chest-deep into the North Sea isn’t where you’d expect to find a draft horse with a ubiquitously-yellow-clad fisherman sitting astride–yet if you’re in the Belgian fishing village of Oostduinkerke, that’s exactly what you’ll see. Only 12 households still maintain the old horseback fishing tradition out of thousands who used to fish the entire Belgian coast. Sadly, like many other horse-powered industries, horse fishing simply isn’t profitable–but in the interests both of generating tourism in the area as well as preserving living history, local and national agencies have stepped in to help keep this way of life going strong.

The horseback shrimp fishing technique is over 500 years old and is basically unchanged, down to the horsepower itself. Fisherman use the strong native Brabant draft horses, sturdy in bone and quiet in disposition while being tough enough to walk on in deep water dragging a net. Traditionally, the coast was populated with small farms which desired gray shrimp (native to the waters of the North Sea on Belgian’s coast) to use as fertilizer for their fields. Now the coasts are developed, and in Oostduinkerke in particular the village has become a tourist destination, and the shrimp have become a popular local delicacy. The downside is that fishermen must stable their horses further inland and drive them to the coast on the two days a week they fish.

Shrimp fishing takes place twice a week, every week of the year. The fisherman drop their carts on the shore and prepare their nets: the horses drag a pair of boards which open the nets in the water, as well as a chain which drags the sea floor (and, of course, the horses carry the fishermen on their backs.) Vibrations from the chain scare the shrimp into the nets. The process is less damaging to the coast than traditional shrimp trawling which can severely tear up the sea floor. When the nets are full, the fishermen and horses trudge back to the beach, where the catch is sorted. On certain days the shrimpers cook parts of their catch right on the beach and sell cooked shrimp directly to throngs of tourists who have gathered to watch the entire process as a live exhibit. Most of the time, the fishermen pull their catches back home via horse cart to cook and sell out of their houses. The fishing process takes place an hour before and an hour after low tide.

This video beautifully illustrates the beauty of the horse fishing process, as well as insight from a fisherman about the practice:

While the dozen or so fishing families in Oostduinkerke are grateful for the support that comes from the tourist board, they are also realistic about the future of their unique trade. There are a few young people learning the skills, but horse fishing can no longer support a family and fishermen must take a regular job on the side. The industry has only survived in Oostduinkerke because of tourist support as well as the village’s ideal coastline–gently sloping and free of underwater obstacles and hazards. However, shrimp are starting to become scarce, which does not bode well for the future of the shrimping industry in general in the North Sea.

On the plus side, the fishermen also experience the kind of bond and love of working closely with an animal that most of us as riders are familiar with. It takes time to train a draft horse to perform his duties well in shrimp fishing (we’ve all seen that viral meme of the horse meeting the ocean for the first time–imagine that but in draft-horse form) and once a fisherman finds a suitable horse they are usually partnered for life. Even if horse fishing is a dying art, it’s well and alive in the hearts of those carrying on the tradition.