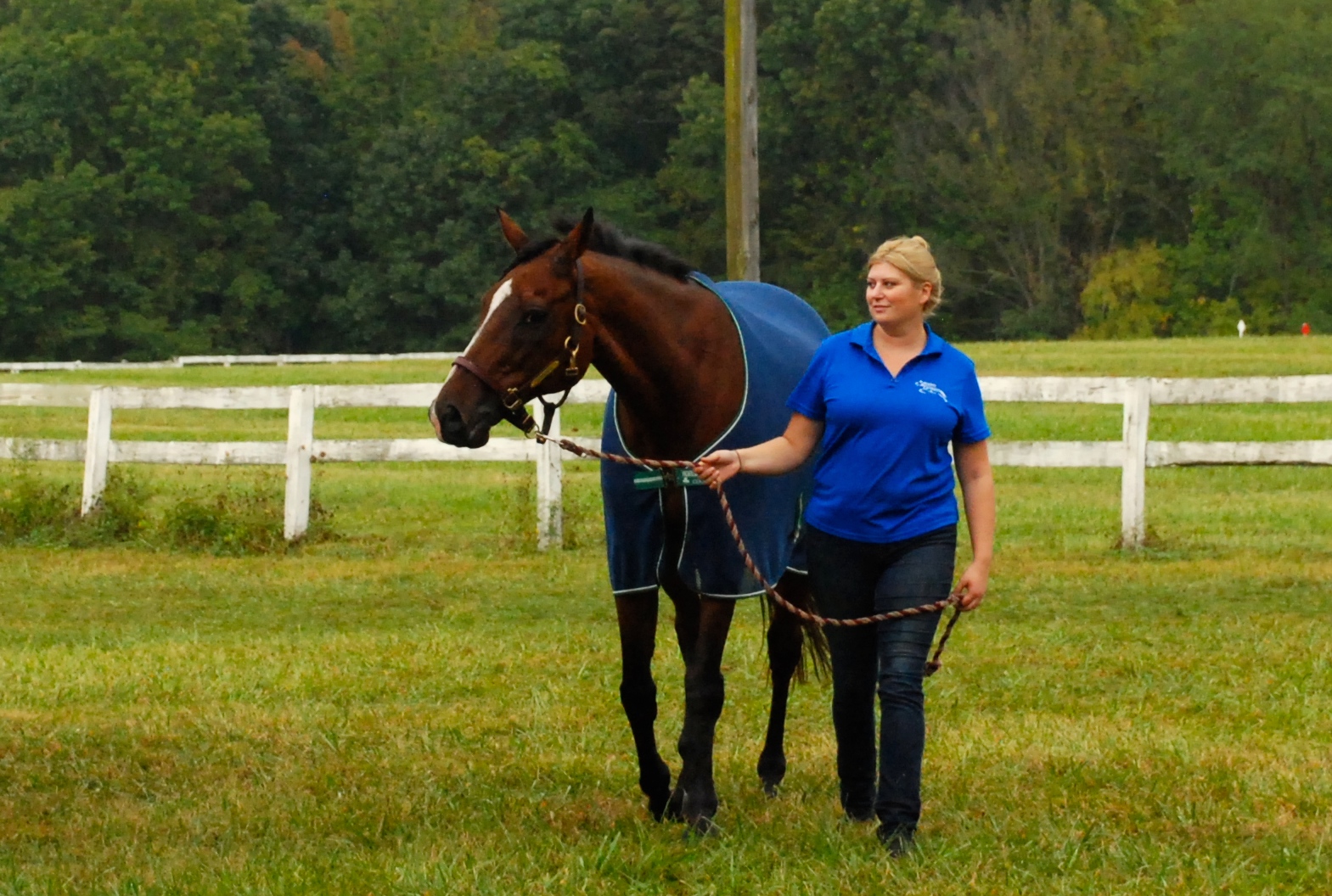 Once the horses are bathed, braided, and loaded on the trailer, a horse show groom’s day is just getting started.

That’s what I found out from shadowing Erika Jenkins, who runs Zoom Groom, a freelance groom business in the heart of Area II eventing country. Her client for the day, Sheri Thornley and her two horses Azari (Ari) and Toga, had late morning times for Training level dressage, so Erika’s day began uncharacteristically late–a 6 a.m. wakeup, then over to the barn to bathe, groom, and get Ari and Toga on the road.

Of course, that was all before I even met up with Erika, Sheri, and Sheri’s daughter Addie at Bittersweet Field, the site of the Seneca Valley Horse Trials.

Like a good photographer (or one who has no idea how to use a fancy borrowed Nikon), I got there a little early to figure out the best settings for the overcast, rainy day. Ok, who are we kidding here–I just wanted to get in some Boyd Martin-stalking before the crazy day began.

Boyd warming up CrackerJack, one of the SEVEN horses he competed this weekend

Around 10:40, they rolled in–giving them just about 40 minutes to get Toga tacked up and warmed up for dressage at 11:28. As I later found out, they were held up by a line for diesel at the gas station and a cycling race happening on the windy country roads. Of course, right as their trailer rolled in, so did the rain.

After running into Erika as she picked up Sheri’s registration, I grabbed a raincoat from my car, and made my way down the looooooong driveway from the car parking lot to the trailer parking lot. I was half-afraid I would miss the whole grooming process, but I shouldn’t have worried. Once I found their trailer, I walked into a tornado of activity–Sheri getting dressed, Erika cleaning up poopy hind legs and cleaning out stud holes in Ari’s shoes, and Addie using her mega-muscle to screw in the studs for the later phases. Sheri’s four-stall trailer has a nice setup with a big aisleway in the middle, but that was a LOT going on so I just found a corner and stayed out of the way!

Note Toga’s pirate patch–he is blind in one eye.

Soon enough, Sheri and Addie were off to the warmup ring!

Erika stayed behind to keep an eye on Ari and prep for the next phase.

“Half of the job in grooming is just anticipating the rider’s and the horse’s needs–having everything set out beforehand so it’s in easy reach when you need it,” Erika explained. Organization, too, plays a major role in it. Her cell phone has an elaborate timer system in its calendar so that she knows exactly when she needs to switch gears.

“Having a system like this helps so much,” she said, “You know, sometimes you get really caught up doing something, or Boyd Martin walks by and you lose track of time.” Obviously, a sense of humor helps too if you want to become a horse show groom.

“You also have to adapt to your clients,” Erika continued. And there’s a whole range–some want the groom to do all of the horse prep, while others just want a cheerleader and an extra hand to keep them from freaking out when show day nerves hit. Today, Erika’s role is that of coordinator–with four people and two horses in one trailer (even if it is a good size), there are a lot of cooks in the kitchen, and she’s keeping us on track to serve up a great performance.

Dressage doesn’t take long, and once the braids are out, it’s time to hurry up and wait.

Grooming pro tip: Use curved cuticle scissors to cut out the thread so you don’t accidentally cut out bits of mane.

Toga switches over to his stylin’ cross-country and stadium headgear, and we all head out to watch a few showjumping rounds. Everyone else seems content to munch on apples and Clif bars but it’s noon and watching everyone else work hard in the rain is really making me hungry. I inhale a BBQ sandwich in about 30 seconds.

When we head back to the trailer, it’s time to tack up for stadium and XC. It’s raining even harder, so Sheri elects to switch out some of Toga’s studs, explaining which kinds she prefers for different types of footing.

“Another important thing is to learn from every situation,” says Erika, “You never know when a little tidbit might help you with your next client.”

For a while it’s looking pretty iffy, and Sheri considers not riding…but right on cue, around 2pm the skies clear up. (I guess the weather was afraid to find out what would happen if it didn’t cooperate with Erika’s phone schedule.)

After handing off Toga to Sheri, again, Erika stays back in the trailer so Ari won’t freak out, and gets water and a cooler ready for when Toga comes back from the jumping phases.

Toga comes back steaming in the Maryland humidity, and Erika’s ready to offer him water, bathe him, and walk him out.

It’s 3 pm, and time for the whole process to start again with Ari. Erika’s day will end around 6 or 7 pm, and then she’ll be up early tomorrow to braid more clients’ horses competing at Seneca.

Grooming is a challenging job–the hours are long, you need amazing tact to keep on schedule despite show day stresses, and you need many hours of practice to perfect braiding, clipping and all of the other miscellaneous tasks that go into it like making sure little Jack Russells named Spike don’t get stomped on. And you don’t even get to watch the show.

“I wouldn’t have started up my Zoom Groom business if I didn’t think it was fun,” says Erika, “I think of my job description as: groom, friend, and press agent for Spike.” 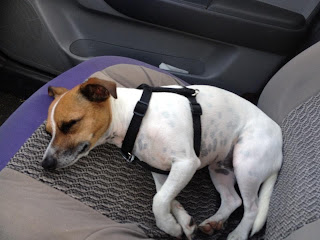 Wake up early, head to the barn, show, and then crash out and do it all over again–I may have only shadowed part of a day in the life of a horse show groom, but it doesn’t sound like a bad gig.