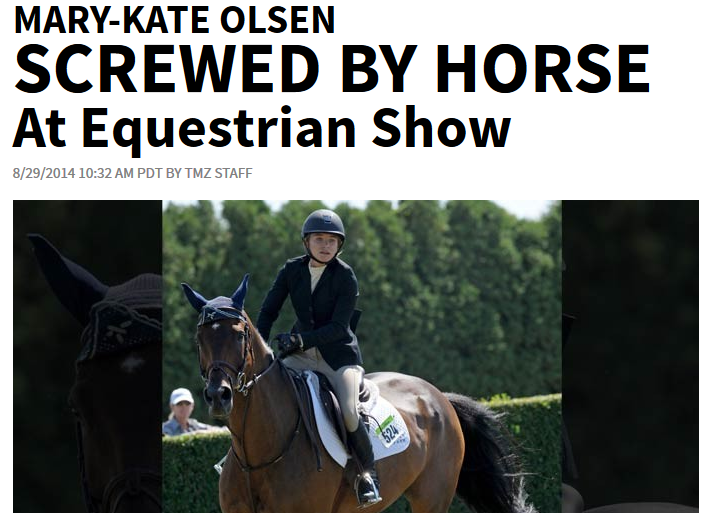 When the 28-year-old competed at the Hampton Classic a couple weeks ago, the paparazzi did what they do best: lose their minds completely.

Which was quickly picked up by dirt merchants around the world. It’s always entertaining to watch the media attempt to write about equestrian sport — here are a few of the more ridiculous headlines we spotted.

From The Times of India:

From The Daily Mail:

And then there was this hilarious spread, sent in by reader Mérida Miller: “According to People Magazine we’ve been it doing all wrong. I know one horse who will be excited once I tell him dressage actually does include jumping over those while rails!”

The stories themselves were equally entertaining, if not more so.

UsMagazine came through with this dumbed-down commentary:

But the sensationalism award goes to the recap on Celebuzz, which featured an exclamation mark at the end of every! single! sentence!

So what’s the story with Mary-Kate’s riding, anyway? Mary-Kate (or Michelle Tanner, as she will always be known in my heart) has always had a soft spot for horses.

And then there was the final, heartwarming episode of Full House, in which Michelle falls off her horse and gets amnesia, forcing the family to sit around and share their fondest memories of one another:

Michelle, I mean Mary-Kate, rode for the first time in 1992 during the making of a film called To Grandmother’s House We Go, then competed on the equestrian team at Campbell Hall, the grade school she attended in Studio City.

Mary-Kate has owned a handful of horses over the years and ridden occasionally in adulthood. It appears that she has been ramping up her involvement in the sport over the past couple years, and we’re glad to see her out and about in the show ring. Horse girls be horse girls forever. Go Mary-Kate, and Go Riding!