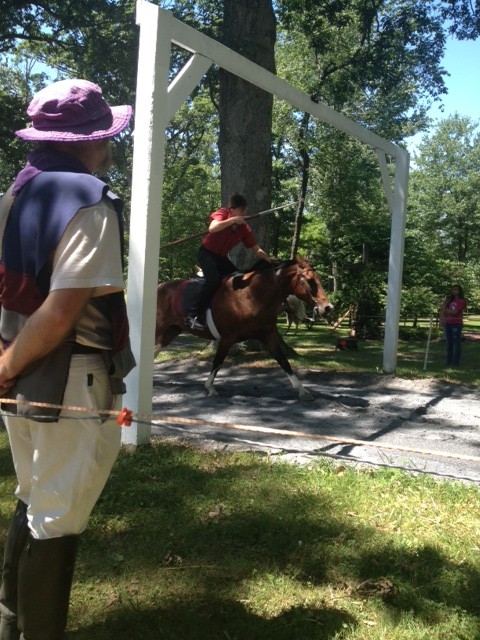 You may have seen jousting knights at the Renaissance Fair…but have you ever thought of trying it yourself?

Now that’s not a sign you see every day on your way to the barn. But I did, and I figured I had to check out exactly what kind of people and horses still compete in the medieval sport of ring jousting in 2014.

Little did I know that I would get the chance to try it myself, and meet the man responsible for making jousting Maryland’s official state sport in 1962!

Jousting is the Maryland state sport (well, technically now it’s the state individual sport, and lacrosse was named the state team sport in 2004–a fact which modern-day jousters shrug off dismissively). Tournaments have taken place in the state since colonial times, and the sport is memorialized on the Maryland State Seal. 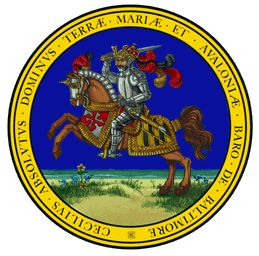 The aim of jousting is to make it down an 80-yard-long track while using a lance to spear three rings, which hang from arches above the track. Riders in the Novice division can trot down the track, but for Amateur, Semi-Pro and Pro divisions, the aim is to make it through the course with all three rings in under 9 seconds, though times of 6 or 7 seconds are not unusual!

Competitors make their own jousting lances, and can use any kind of tack they are comfortable in. I saw everything from cutback Saddle Seat saddles to a Portugese bullfighting saddle. 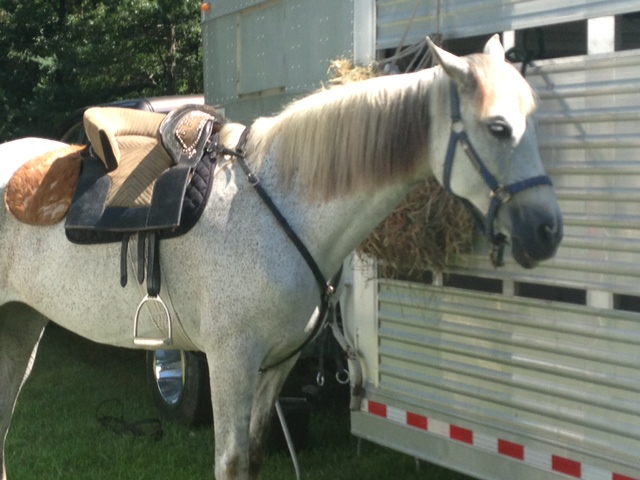 The owner of the latter noticed my interest in his saddle and his horse, an Andalusian mare named Rosie. What can I say, I have a thing for fleabitten grays. And she looked FUN.

“You should try it,” he said, “You can register in the Novice division.”

I couldn’t believe it! I thanked him profusely. He shrugged. “How are you going to write about jousting if you don’t try it yourself?”

I didn’t know. I was nervous. I knew I would be terrible. But mostly, I wanted to gallop up the track like a maniac. I was already wearing my boots and breeches from riding earlier that morning, so I ran to grab my helmet from the car. On my way back, I registered with the organizers–all of the usual stuff, like a waiver, name, address…and a space for my assumed jousting name.

I mounted up for a little practice run. Emphasis on the “RUN,” as her owner was competing in the Semi-Pro division that day, and the mare definitely knew her job. I gathered my reins in one hand, pointed my right hand like a gun (or a really tiny lance) as I had seen others do in their practice runs, and let her go! 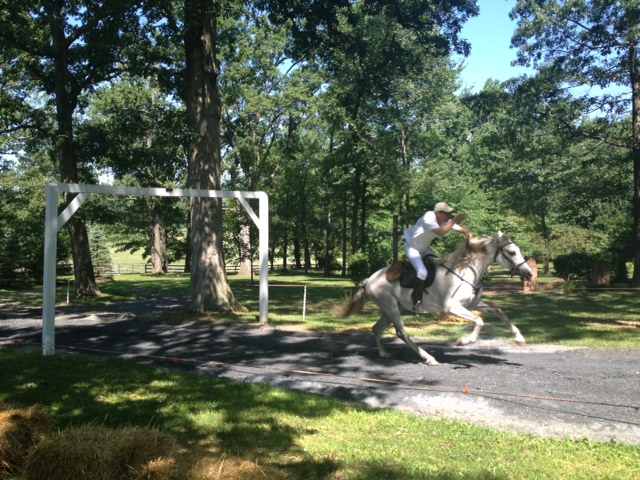 Rosie’s owner doing a much better job than me!

I don’t think I actually saw any of the rings but I was pleased that Rosie had a good stop on her once we reached the top of the hill. We moseyed back down to the “on deck” area to chat with other competitors, and someone handed me a lance to use–essentially, a broomstick with a giant blunt nail sticking out of it. Great thing to have on a large flight animal with little self-preservation instinct.

“Now make sure you keep that thing pointed straight up–don’t want to gore your horse if she turns to get a fly or sumthin,'” one of the veterans instructed me.

I felt ridiculous holding it awkwardly out to the side, but also…a little bit like a Fair Lady of the Lake, gallantly brandishing my lance on my courageous mount. 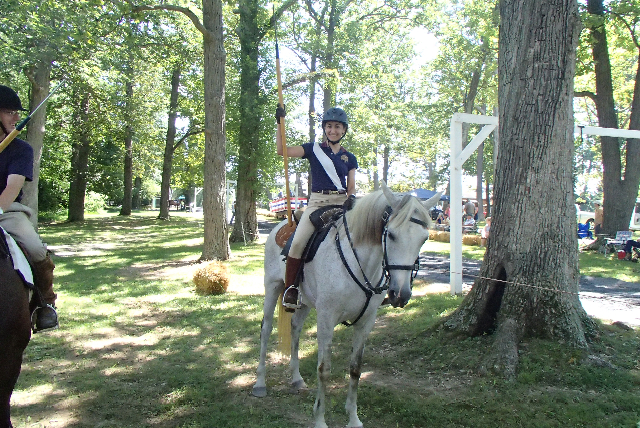 While I was waiting for my turn, some of the competitors explained the rules. Riders have three chances to run the track in each division, racking up more points with each run. If there’s a tie (and there often is), the winner of each jousting division is determined by elimination rounds. The rings get smaller and smaller…from 1.75 inches in diameter to a quarter inch! Whoever can get the most rings while still staying under 9 seconds wins the division. And of course…the winner gets a crown. 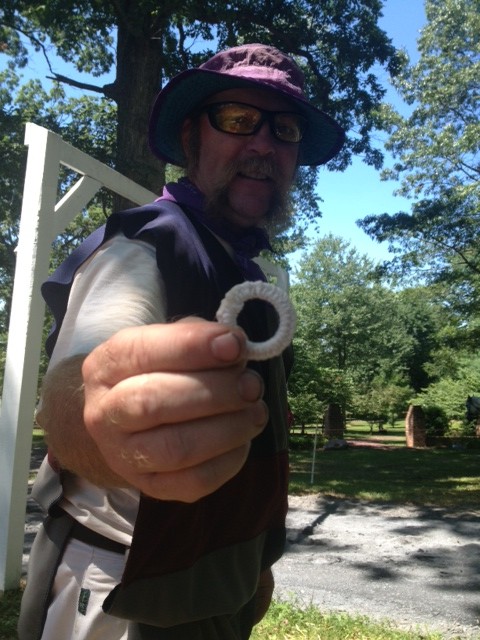 This ring is just 3/4 inches in diameter on the inside.

It was finally my turn. I made it down to the start of the track, and Rosie started getting antsy, jigging and clearly wanting to spin around and GO! My heart caught in my throat. Maybe she was too much horse for me. Then I heard over the speakers, “Carla Lake, Lady of the Lake…CHARGE!” That’s right! I AM a Lady of the Lake! I CHARGED! 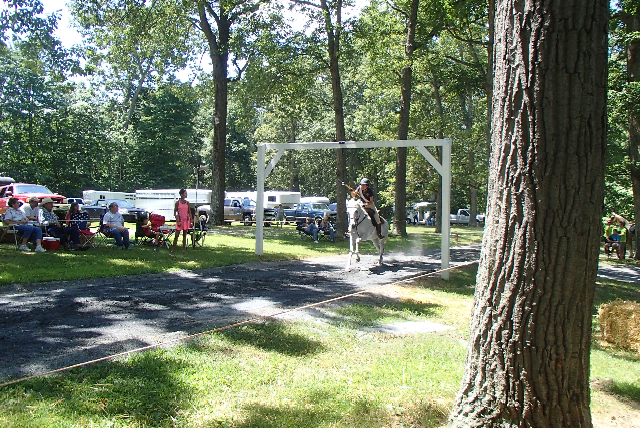 In my first run, I was just trying to figure out how to hold the lance properly while also holding a galloping Andalusian with the other. In the second run, I managed to stay still enough in my galloping position to attempt to spear some of the rings, but no luck. On the third try, I did manage to hit one of the rings with my lance, but didn’t actually hook it.

Now, this is the part of the story where I would normally say I gained a newfound appreciation for a sport that seems easy when the pros do it. Except, I had only seen beginners run at this point. Jousting does not look easy and it isn’t easy–which makes it all the more impressive to see a “maiden” or “lord” who can stay still and quiet above a galloping horse, while plucking tiny rings out of the air!

Today, jousting competition in Maryland is governed by the  Maryland Jousting Tournament Association, which has three regional branches. It is certainly an niche sport, and competitors revel in the pageantry–dressing the part of squires, and assuming jousting names like The Maid of Norfolk and Sir Lancelot. But like any other equestrians, they’re really just out there to have some fun, and whole families get into it. I saw kids hopping on and off the same horse in between runs, taking turns for their chance to trot up the track. And there were some families where the jousting tradition goes back for generations.

That includes the “founding family” of jousting as Maryland’s official state sport — the Enfields. 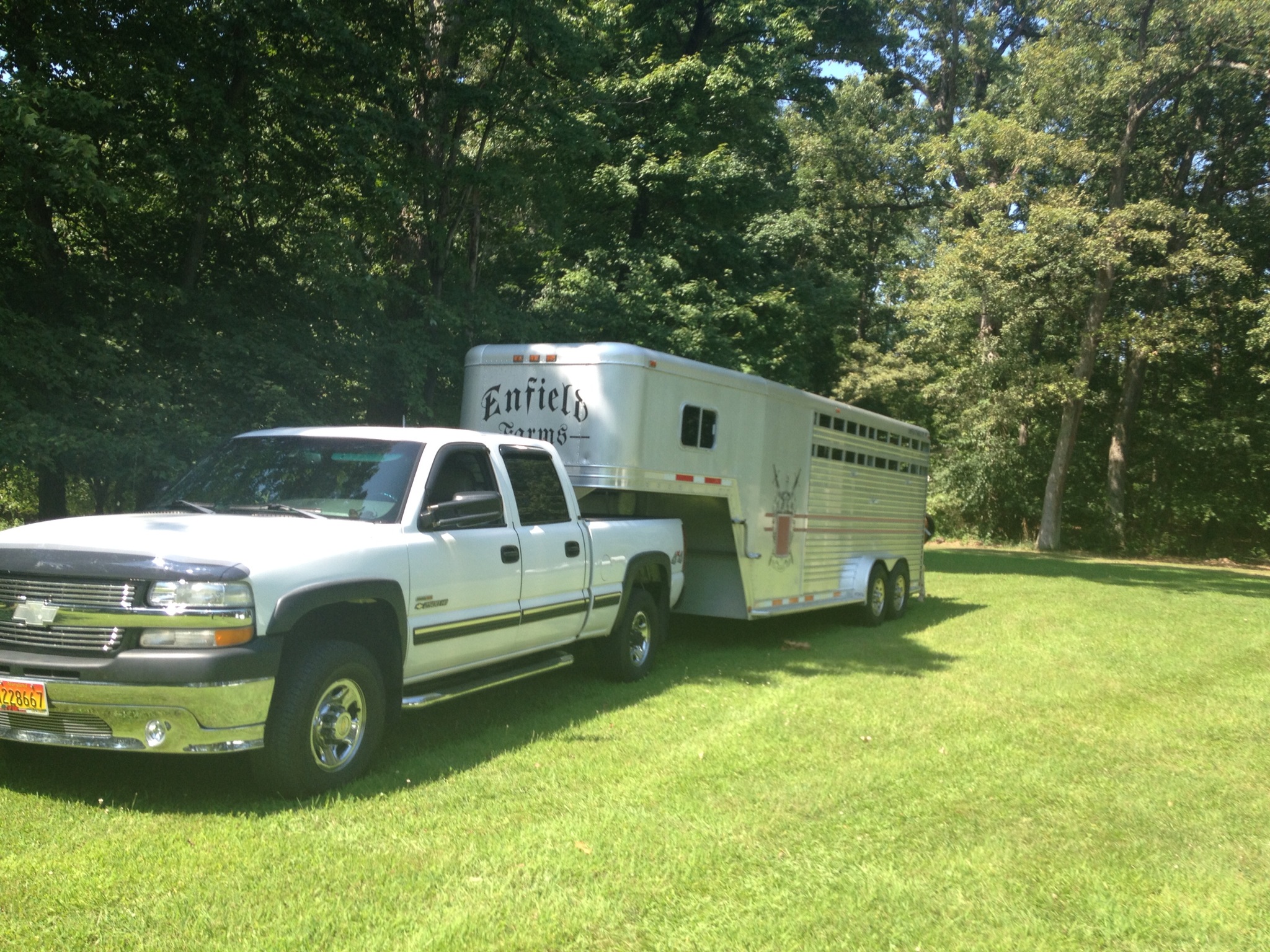 “It’s something I just fell for,” he said. “I saw the first joust in Frederick, MD after World War II. One of the old riders came to my farm and helped me set up a track in our own little woods, and that’s how I got my jousting name–“Sir Little Woods.”

Enfield was a major player in getting  jousting approved as Maryland’s state sport in 1962–though he said it did help that the woman in charge of the committee of the Maryland State Association was a daredevil known for going down the jousting track while standing upright on her pony’s back! The Enfields continue to be instrumental to keeping jousting alive in Maryland, and at one point, Leon Enfield had 11 family members and four generations of jousters at once!

Today, he sat trackside with his wife Shirley (whom he courted way back when by giving her a crown he won at a jousting tournament). He recalled the days when the national jousting championships took place right by the Reflecting Pool in DC, and he galloped straight down the National Mall toward the Lincoln Monument to win in 1968 and 1969. But as the pair sat in the shade, they simply enjoyed watching their two grown sons, a cousin, and many friends continuing the jousting tradition.